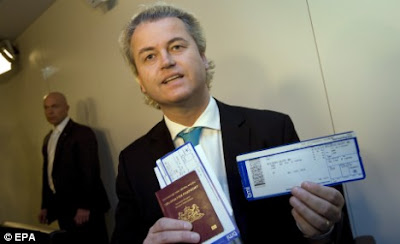 TWITTER has it that Wilders has been “taken away”

“A newspaper reports that Dutch MP Wilders has been “taken away” from an airliner at Heathrow Airport, no immediate official confirmation.”

And that: A Dutch newspaper reporter describes a “chaotic” scene aboard an airliner at Heathrow airport as banned Dutch MP tries to enter country.

The Daily Mail: The right-wing Dutch politician banned from visiting the UK over his anti-Islam views arrived at Heathrow airport this afternoon. Geert Wilders’ passport will be flagged up and he will be refused entry to Britain when he arrives at immigration, according to Home Office spokesman. And Heathrow’s owners BAA said immigration officials and police will be on hand to prevent Mr Wilders from going beyond passport control. Mr Wilders was invited to Westminster to show his 17-minute film Fitna, which criticises the Koran as a ‘fascist book’, by a member of the House of Lords. 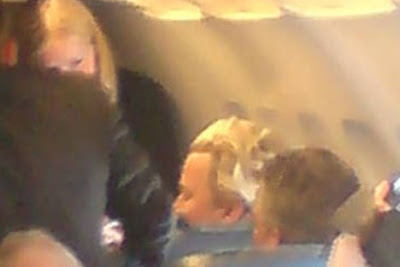 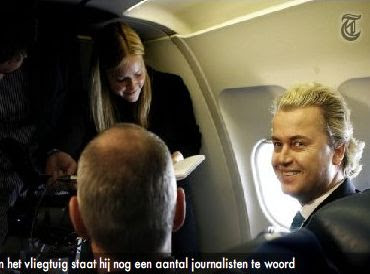 Will update as soon as more comes in. KGS

The far-right Dutch politician Geert Wilders arrived at Heathrow today to test the Home Secretary’s ban on him entering the country.

Immigration officials were expected to deny the Dutch MP entry to the country after the Home Office decided that he should not be allowed to attend a screening of his controversial anti-Islam film tonight.

He added: “They (the British government) are more Chamberlain than Churchill.”
At 2.20pm Mr Wilders was escorted through UK immigration by two plain-clothed officers from the UK border agency.

Mr Wilders, 45, an MP in the Netherlands, caught a British Midlands flight from Amsterdam this afternoon brandishing his passport and boarding pass. He said he would have to be physically restrained from entering the country. “I’ll see what happens at the border. Let them put me in handcuffs,” he said.

The MP was invited to attend a showing of his 17-minute film Fitna at the House of Lords by the UKIP peer Lord Pearson.

UPDATE: Wilders still being held in custody at airport.

FOX: “Wilders remains held at the airport. Dutch Foreign Minister Maxine Verhagen told the Mail that the Netherlands government would press to lift the travel”

Pamela at Atlas says: Bye bye England — they are done.
Dutch lawmaker Geert Wilders, in a text message, tells the Associated Press he will be returning to Holland within the hour after arrest.

UPDATE: ATLAS: Dutch lawmaker Geert Wilders, in a text message, tells the Associated Press he will be returning to Holland within the hour after arrest.

Bye bye England — they are done. They should be kissing his ring for his bravery and courage in doing what they don’t have the spine to do. The Home Secretary Jaqui Smith who barred Wilders entry (see letter) has renamed Islamic terrorism ‘anti-Islamic activity‘and has will welcomed the most violent Islamic radicals while simultaneously banned Jews.The plea of a free man:

“Threat to society? I’m an elected member of Parliament; I have done nothing wrong,” “I’m a normal, law-abiding democrat. You might agree or disagree with my political point of view, but I’m no threat to anyone.”

This is a fatal blow to free speech.