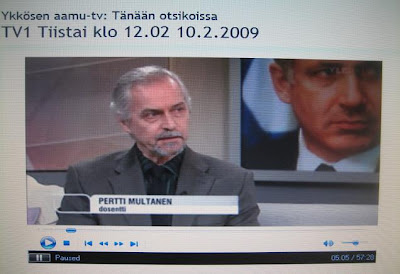 I couldn’t think of anyone less appropriate to discuss anything remotely related to the Middle-East conflict, than far-Lefty loon, Pertti Multanen. The Tundra Tabloids regards him as being highly responsible for helping to create the very fertile environment in Finnish academia, in which the demonization of the Jewish state is taken as badge of honor. So who does Finnish state TV call on to discuss Tuesday’s election in Israel, none other than this clown in a professor’s suit, Pertti Multanen, who ends up during the interview, painting Zionism in the worst possible light, by declaring that “there is little difference in Israeli parties, they are all nationalistic in one way or the other”.He knows exactly what he’s doing, being a hard-Lefty, he deplores anything remotely resembling nationalism, especially Zionist nationalism, but Arab nationalism, well that’s an entirely different subject, (as far as the TT has heard) he never has anything bad to say about that.He saved his ire especially for the Likud party spokesman, Benyamin Netanyahu, deeming him “an opponent to peace, and an ultra-extremist who rejected the Oslo peace process.” Well, clearer thinking minds realizes that the Oslo peace process was nothing more than a Trojan Horse of Yasser Arafat’s, who aimed to keep alive the war against Israel, this time carrying it out in its own back yard. Shame on Benyamin Netanyahu for spotting that “inconvenient truth”, if Israel would have listened to him and others who thought like him early on, Israel would not have had to contend with an armed enemy launching devastating suicide bombings on Israeli citizens. But anyways, this is the type of, laughable but dangerous, Middle East “experts” Finnish TV has to offer. Total cranks. KGSNOTE: TV interview available in Finnish here.