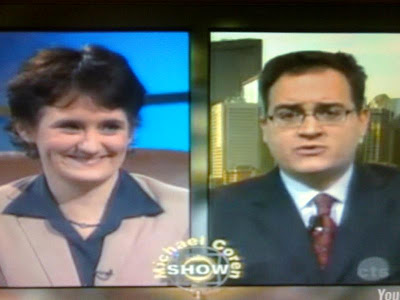 Ezra levant: Listen, I think that one of the themes of this show has been extreme political correctness, and Andrea has been a case in point of that. There is nothing that she approves of, she talked about diversity in the UK, she’s for every kind of diversity except for intellectual diversity.
I want to live in a country where people are free to tell jokes, even bad jokes, where people are free to be rude, and we don’t need the government and a bunch of ninnies to hound them. Let’s have a free country, I don’t want to live watching over my shoulder that I don’t offend Miss Andrea.
Host Michael Coren : Andrea I think that’s over to you.
Andrea Calvert: Well twice during this show I had to listen to Ezra talking about how the liberal Left, and women in particular, have not stood up against the Muslim extremists for women in our own country, and I want to remind you that here in Ontario, it is feminists who lead the charge against sharia law, becoming law in Ontario.
But I think on the Left, there’s a tremendous importance to human rights campaigns, there are meetings, I have been to different educational events about really countries around the globe, but what we don’t want to participate in is a campaign of hate. And quite frankly, from people like Ezra, through his vilification of Muslims in his human rights tribunal…..
Levant: really?
Calvert: Yes.
Levant: When did I (Calvert still talking) Excuse me, when did I vilify Muslims?
Calvert: I didn’t want to sit there (Levant: excuse me) and become involved in vilifying people because of their religion.
Levant: Excuse me, you just said I vilified Muslims. I probably hired more Muslims at my magazine than you even know in your whole life. Can you tell me where I vilified Muslims, I mean, that’s an outrageous charge and I would like you to back that up please?
Calvert: Are you going to sue me.. ha ha ha? But I do think that um,…
Levant: You’re talking out your ass…
Calvert: No, several year ago you did publish those cartoons, that was a phenomenally offensive thing, it has provided great controversy, (Levant: So how did I vilify Muslims) it’s like you’re having a second career…
Coren: (Breaks for a commercial) Ezra wanted you (Calvert) to give an example of, the phrase you used was what?
Calvert: Vilification. Yes.
Coren: Vilification , by publishing those cartoons, but obviously this is an emotional, emotive point, by publishing those cartoons, many would say, I would be one of them, why wouldn’t you publish the infamous cartoons, that were causing demonstrations all over the world? It was enormously newsworthy, I think we know that other papers wanted to do it, but they were frightened over the security implications if they did. That doesn’t mean you vilify Muslims, that means you publish cartoons about radical Islam and what’s being done in the name of Islam.
Calvert: But one of the themes of this show that has been talked about is the failure of the Left to defend Canadian society and I think that..
Coren: I think he wants examples of where he vilified Muslims.
Calvert: Where he has?
Coren: Yeah, you did say he vilified Muslims.
Calvert: Well in fact, I think that, you know, the publication of those cartoons at that time really was actually a really aggressive, and confrontational thing to do, and it was in fact really rubbing of the nose of the Muslim Community, and a…. (Coren: Ezra go ahead) a ……
Ezra Levant: What a clown. I mean, I’m embarrassed for you Andrea. Those cartoons were the central artifact of the newstory, they were the reason for riots, we showed them not asthe expression of our own editorial view, but as a prosecuter would put an exhibit before a jury, here’s what’s going on. You think that reporting the news is a “hostile an aggressive act”? I hope your burqa rests lightly on your shoulders, I wish you were a true feminist than a theocrat.

Here’s the video as well, it’s a real treat to see these wind bags get slapped down as they should. KGS