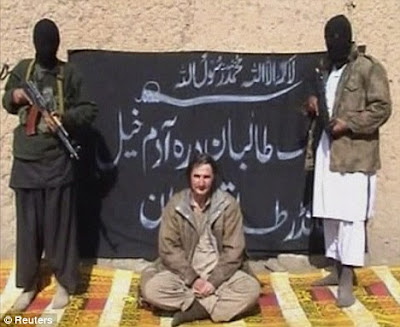 The man was just a surveyor for a Polish geophysics institute who ended up being taken hostage by Taliban Islamic fundamentalists, you know, those Muslims that follow word for word what the prophet of Islam commanded his followers. The media will spin it as an act by “extremists” operating outside Islamic norms, but in reality, they will find nothing un-Islamic at all about the horrid act.

Qur’an:9:5: “Fight and kill the disbelievers wherever you find them, take them captive, harass them, lie in wait and ambush them using every stratagem of war.”

A shocking new video that appears to show Pakistani militants beheading a kidnapped Polish engineer has emerged. The seven-minute video appears to show the Polish hostage, Piotr Stanczak, sitting on the floor flanked by two masked men. Off camera, a militant briefly engages him in conversation before three others behead him. The video is so horrifying that some news wire agencies chose not to distribute the images.

One of the hooded men then addresses the camera, blaming Pakistan for the killing for not agreeing to their demands to release Taliban prisoners. If confirmed, Stanczak’s death would appear to be the first killing of a Western hostage in Pakistan since U.S. journalist Daniel Pearl was beheaded in 2002.

The video was given to an Associated Press reporter yesterday in north-western Pakistan on a flash drive by an intermediary who said he obtained it from the Taliban. Jacek Cichocki, Polish minister for security services, said he saw the full video and in his opinion ‘that is the Pole and the film is authentic.’

‘I can say that watching the film last night, it is a terrible thing,’ he told Poland’s TVN24 television, adding final confirmation would have to wait until diplomatic and consular services receive the body. Piotr Adamkiewicz, a spokesman at the Polish Embassy in Islamabad, said today the mission was still waiting for some formal communication