At least in practice, that’s how the Finnish capital’s paper views the Jewish state. 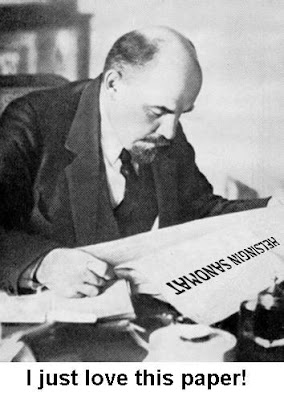 In yesterday’s edition of the Finnish paper, Helsingin Sanomat, an entire front page of the foreign news is given to HS journalist, Jukka Huusko, concerning the recent war in Gaza. Both articles labored heavily on telling the “Palestinian perspective”, but typically without any qualifying statements that would put “the perspectives” being reported on in a proper light.Interviewing a mother, Saeda Abd Rabbo, the reader comes to know “how relieved she is that at least a portion of her house remains standing”, but nothing is mentioned of the Hamas’ use of these houses to store weapons and launch Qassams, Grads and mortar attacks which invariably lead to the destruction of the dwellings.Here is what TT contributors Al Avai and Tundraman had to say about yesterday’s series of Israel bashing articles:Al Avai: The Hesari today gave us a full page on page 1 of the foreign news section on Gaza. A big photo, bloody red sunset with ruins silhouetted in the foreground. Below, a big photo of a cute Palestinian girl, maybe 12, who “lost 29 of her family in a bloodbath.” 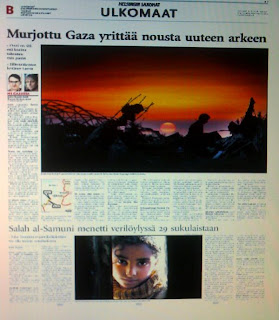 On page 3 there is a small article, with a small map of the Congo, with the the text:”Some 900 people killed in a bloodbath.” 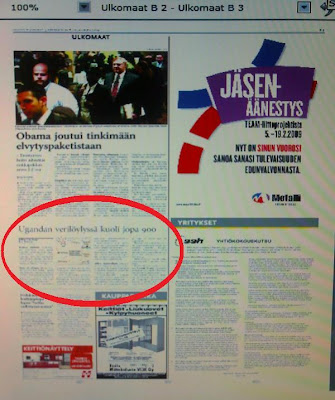 I just did a small calculation: The story about the 29 merited 5.5 cm2 per person; the one for the Congo gave 0.095 cm2 per person. Apparently Gazan lives are 57.9 X more worthy, or newsworthy. Oh, and the bloodbath in the Congo was not an accidental bi-product of conflict… If we add an “impact” factor frontpage 1 vs 3, it is even worse!
Tundraman adds:The Helsingin Sanomat spends one whole page (B1 Ulkomaat) and an Editorial (“Kova linja menestyy Israelissa” – The hard line is successful in Israel) just to bash Israel. War or no war – not a single opportunity is lost in order to depict Israel as an apocalyptic beast:The titles on page B1 are: “Murjottu Gaza yrittää nousta uuteen arkeen” and “Salah al-Samuni menetti verilöylyssä 29 sukulaistaan” (Mangled Gaza tries to rise up to a new every-day life, Salah al-Samuni lost 29 of her relatives in a bloodbath). The latter article shows a picture of the 9 year old girl, tells that a 4 years old boy who pulled an Israeli soldier by the leg of his trousers was shot dead in cold blood, etc. It is an incredible piece, totally convincing the readers of the innate murderous nature of the Israelis.The editorial section first assures the reader that all parties in Israel approved of the Gaza war (which they did, but no reason why is given), then predicts that Netanjahu will win the election and that he “rejects the main principle of the negotiations according to which Israel has to withdraw from the Palestinian territories it has occupied in exchange for peace”, and finally brings up the incident with Israel Beiteinu and says that, although the highest court overruled the decision to prevent two Arab parties from participating in the election, “some groups of Israeli Arabs have started to demand a boycott of the elections”. This is where the editorial ends, as if conveying that “HS agrees!”What is absolutely clear by now is that HS is incapable of anything even remotely neutral when it comes to reporting about Israel. If anything, it represents the view of Hamas and the most extremists “groups of Israeli Arabs” – ANYTHING but mainstream Israel, which seems to be, for them, the devil in disguise. I see no other source for this one-sidedness than a deep-seated, at least partly subconscious antisemitism, originally deriving from early Christianity and transformed in 19th and 20th century history to a far-Left anti-Zionist ideology, by now completely legitimized in mainstream Western European public discourse. In Finland its impact is, however, devastating, as it is the ONLY perspective visible in mainstream Finnish-language media.
KGS: I will also add that the HS’ editorial mentioning of the exclusion of these Arab parties, was not accompanied with the reasons as to why they were initially disqualified. There is no question that the two Arab parties, Balad, and the United Arab List-Ta’al meet the qualifications of parties that should be excluded from participating in elections for the country’s parliament, the Knesset, on grounds that they don’t recognize the state of Israel and they call for armed conflict against it.I find it interesting that here in Europe, within the heart of the EU, the Vlaams Belang is sidlined by all the other major political parties within Belgium and throughout the EU, becuase they are seperatists. In spite of their fully democratic, concervative and liberal minded party platform, the Socialists find no problem in ensuring that they never become a coalition partner in the Belgium government, but at the same time, weep tears over the sidelinging of a genocidal party like the Hamas and anti-Israel domestic parties like Balad and the UAT.The Helsingin Sanomat’s Jukka Huusko then propogates the “massacre” meme, without even taking into consideration the umpteenth number of times the Palestinians have been caught dissiminating bogus stories and out-right lies. Just recently Israel was found to have been falsely blamed for targeting a UN school where people were seeking shelter, but later it was proven that the IDF targeted an area outside the school from which they were being fired upon.The TT has on repeated occasions mentioned that the Helsingin Sanomat is a biased paper and not even worthy to grace the bottom of a bird cage, I stand by those earlier remarks and under line them as well. KGS