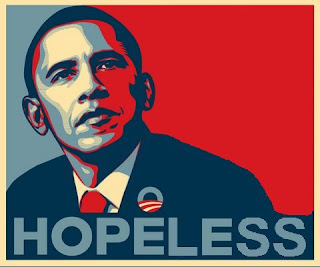 Why am I not surprised?

The graphic artist responsible for printing the iconic image of B.Hussein Obama with a message of HOPE spread across the presidential candidate’s chest, has been found to have pinched the image from an AP photograph.
Frank Shepard Fairey lifted the picture from a photo taken by Manny Garcia in 2006. Fairey knew very well what he was doing, having no intention of acknowledging the original work of Garcia, nor enquiring of any copy right infringements that might exist by using work not originally his own.
It’s a case of ends justifies the means, something of which that has come to symbolize the entire B.Hussein Obama run for the presidency. The Tundra Tabloids believes that Fairey rushed his copy-right infringing image too soon to the streets, so the TT added a few letters that were obviously missing. KGS
B.Hussein Obama’s half-brother George in Kenya 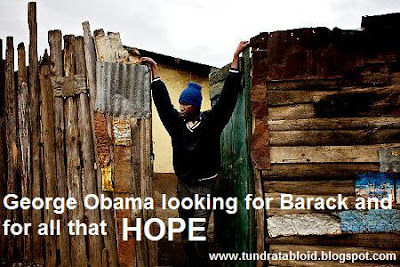 AP alleges copyright infringement of Obama image
NEW YORK (AP) – On buttons, posters and Web sites, the image was everywhere during last year’s presidential campaign: A pensive Barack Obama looking upward, as if to the future, splashed in a Warholesque red, white and blue and underlined with the caption HOPE.
Designed by Shepard Fairey, a Los-Angeles based street artist, the image has led to sales of hundreds of thousands of posters and stickers, has become so much in demand that copies signed by Fairey have been purchased for thousands of dollars on eBay.
The image, Fairey has acknowledged, is based on an Associated Press photograph, taken in April 2006 by Manny Garcia on assignment for the AP at the National Press Club in Washington.
The AP says it owns the copyright, and wants credit and compensation. Fairey disagrees.
“The Associated Press has determined that the photograph used in the poster is an AP photo and that its use required permission,” the AP’s director of media relations, Paul Colford, said in a statement.
“AP safeguards its assets and looks at these events on a case-by-case basis. We have reached out to Mr. Fairey’s attorney and are in discussions. We hope for an amicable solution.”