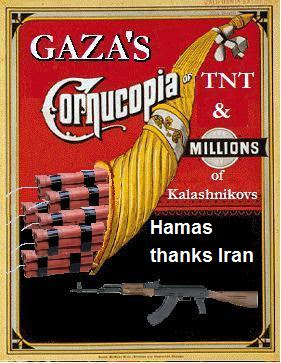 A UN resolution busting arms shipment from Iran to Hamas, has been sitting in a Cyprus port fro several days until someone figures out what to do with it.
What the Tundra Tabloids can’t figure out though, is why: “the US army was restrained from detaining Iranian arms shipment to Gaza due to legal limitations, and that a more decisive UN resolution was required in order to permit such arrests.”
Why was a weak UN resolution issued in the first place, did they actually believe that Iran would not try to run arms to one of its main clients and ally? Come on, who’s fooling who here?
The Islamic fundamentalist Turkish Prime Minister, Recep Tayyip Erdogan, tried to deny in a Newsweek magazine interview, the truth of Iran’s role of patron to Hamas’ war effort against Israel. KGS
Erdogan: Hamas is a political party, not an “arm of Iran. If the whole world had given them the chance of becoming a political player maybe they would not be in a situation like this after the elections that they won.”
Well as Peres stated at the World Economic Forum (Davos):
“…..they have a very unique idea about democracy. They think a democracy is a story of one day in four years, you go through the elections, after the elections you can start to shoot and kill and threaten. Finished. Democracy is not a matter of elections, it is a civilization. And I want to contradict your words (Erdogan’s), by quoting from the Hamas. I won’t give (unclear) ..but Hamas concerns us, Hamas published a charter. Let me read just two lines, three lines from it.
From the Hamas charter (reading from a piece of paper):

“The day of judgment will not come about until the Muslims kill the Jews, when the Jews will hide behind stones and trees, there is no solution for peace initiative, proposals and international conferences are all a waste of time.”

For several days now Cypriot authorities have been detaining the Gaza-bound vessel on the suspicion it is trying to transport arms to Hamas in violation of UN resolutions, Foreign Minister Livni urges counterpart Kyprianou to unload weaponry found on board while latter orders repeat search of the ship.

Foreign Minister Tzipi Livni spoke with Cypriot counterpart Markos Kyprianou by telephone on Saturday, and asked him to unload the weaponry found aboard the Iranian vessel docked at Limassol port and apparently intended for the Gaza Strip.

On Friday Cyprus ordered its security forces to begin searching the ship, which sails under a Cypriot flag. It was detained Thursday at the request of the United States and Israel.