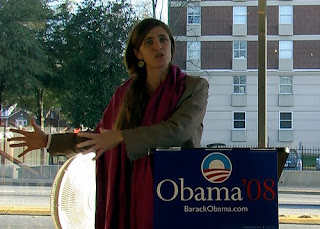 This woman is bad news, a real loon if there ever was one, who actually contemplated invading Israel if the US can’t get its way with the Jewish state. This is the person that B.Hussein Obama trusts more than ever for …. advice.
What’s it going to take for people to wake up and smell the coffee, that Obama is a far Leftist politician who has surrounded himself during every period of his life with people who hold very extremist political views, and that they are so far removed from the average American’s political outlook that it’s shocking.

This woman, Samantha Power actually advocated in a filmed interview the invasion of a trusted ally, Israel, in order to force a political settlement. The video has already been filed down the memory hole by Berkeley University. She actually believes that Israel is such a chief villian, that personally, the TT can’t consider anything she says seriously, she’s that much of a loon, and yet, she’s the apple of B.Hussein Obama’s eye. Birds a feather flock together.

Professor who slammed Clinton will be Obama aide

Officials familiar with the decision say Obama has tapped Power to be senior director for multilateral affairs at the National Security Council, a job that will require close contact and potential travel with Clinton, who is now secretary of state. NSC staffers often accompany the secretary of state on foreign trips.

The officials spoke on condition of anonymity because Power’s position, as well as that of other senior NSC positions, have not yet been announced. One official said the announcements would be made in the near future.

Here is what Samantha Power stated in the 2002 interview:

The Baron sends the following that underlines the gravity of the situation, making Power’s promotion as chief advisor all the more troublesome for Israel. KGS

(ANSAmed) – TEL AVIV, JANUARY 29 – As part of the definitive peace agreements with the Palestinian Authority, Israeli premier Ehud Olmert has spoken of a possible eviction of 60,000 settlers, about a fifth of those who live in the West Bank. The news, reported today on the front pages of daily Yediot Ahronot, has not yet been confirmed. According to the newspaper, yesterday Olmert spoke in detail to George Mitchell, US special envoy for the Middle East, about the peace proposals he had put forward to Palestinian President Mahmoud Abbas. Among the latter is the complete withdrawal from the West Bank.

(ANSAmed) – JERUSALEM, JANUARY 29 – An unprecedented opening to some form of future internation control of the holy places in Jerusalem has today been attributed by newspaper Yediot Ahronot to outgoing Prime Minister Ehud Olmert. The paper does not quote him directly, but maintains that Olmert mentioned it yesterday, although in a hypothetical form, during a meeting with US special envoy for the Middle East George Mitchell. Referring to the possibility of a definitive peace agreement with the Palestinians, the Premier spoke of Israel’s willingness, in exchange for peace and security, to leave certain districts and suburbs of east Jerusalem under the sovereignty of a future Palestinian State.

He repeated however Israel’s claim to Jerusalem, including the old City, as the ‘eternal’ capital of Israel, but without excluding international supervision of its holy places. The newspaper writes of this supervision using two different Hebrew words, (pikuach e shlità), which both mean ‘control’, but with slightly different nuances: the first means an inspectional, almost observational role; the second has a stronger meaning, implying some authority.