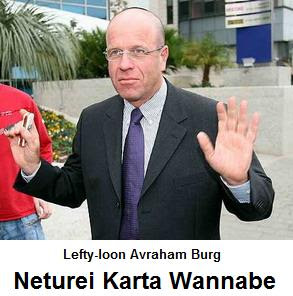 When the Lefty media wants something say, you can be assured that they will indeed find that someone, so who better than a Jew to diminish the Holocaust’s significance in our every day life? None other than Avraham Burg, according to whom we should all just “move on and get over it”.
These are the ‘good Jews’ who do the media’s bidding. When they want to take a big slap at Israel, find a Jewish Lefty nutroot to bolster your own contempt for Zionism and the state of Israel. Much of the European elite which includes the media, politicians and the academy, want to be done with the guilt of the Holocaust, so who better than Burg to relieve them of that unwanted albatross?
In one of the worst examples of bad taste the TT has seen to date, the Helsingin Sanomat’s, Olli Ruohomäki chooses to review (far-Lefist) Avraham Burg’s book, “The Holocaust Is Over” on… Holocaust Remembrance day. It seems that the HS refuses to set a limit on the amount of new lows that paper will commit.
Tundraman: HS gives Burg a whole page to say that Jews “are obsessed” with the Holocaust and should go forward instead of looking backward! Sure, that would suit HS fine
– no more guilt, and more freedom to go back to the tradition of previous centuries: killing about 20 Jews a day somewhere in the world (Israel or elsewhere) is just “business as usual” –
it is THE WORLD (especially Europe) that wants to forget Auschwitz, forget the guilt it evokes, because it WANTS TO REPRESS ANY AWARENESS OF THE DEEP ANTISEMITISM WHICH PREVAILS IN ITS CULTURE and which has now surfaced again, in its contemporary politically correct form.
To pick Avraham Burg for the Holocaust remembrance day is sickening. What HS should know is that Jews can forget Auschwitz only when they are sure that everybody else remembers it and the antisemitic heritage of Western culture that gave birth to it. HS proves that we are very far from that goal.
KGS: Tundraman is correct. Avraham Burg, like the Neturei Karta, believes that Zionism itself is at fault for Jewish victim hood, though in reality, it’s the manifestation of antisemitism throughout the centuries, whether coming from various international organizations or from different sectors of society in individual countries from around the globe.
Burg has it all back-asswards, it is the world’s antisemitism that has caused Jewish self determination (Zionism) in Israel to be a crucial element in the overall project of Jewish self survival as a whole. The man totally misses it, so it doesn’t surprise that his understanding on Muslim-Jewish relations prior to the creation of the Jewish state of Israel is skewed as well.
Burg fancifully recommends in his book that young Israelis should no longer make trips to Auschwitz, “because it doesn’t do anything new”, rather , Israeli Arabs and Jewish youth groups should visit Spain to visit the medieval history: when Judaism and Islam lived in mutual, beneficial interaction with each other with respect.”
Good grief. The problem with that historical rendering, is that “Andulas” is not that garden paradise that is often depicted by those who want to promote the “Islam is the religion of peace” meme, far from it. Dr.Andrew Bostom notes:

“Al-Andalus represented the land of jihad par excellence. Every year (sometimes twice a year) raiding expeditions were sent to ravage the Christian Spanish kingdoms to the north, the Basque regions, or France and the Rhone valley, bringing back booty and slaves. Andalusian corsairs attacked and invaded along the Sicilian and Italian coasts, even as far as the Aegean Islands, looting and burning as they went. Many thousands of non-Muslim captives were deported to slavery in Andalusia, where the caliph kept a militia of tens of thousand of Christian slaves, brought from all parts of Christian Europe (the Saqaliba), and a harem filled with captured Christian women. Society was sharply divided along ethnic and religious lines, with the Arab tribes at the top of the hierarchy, followed by the Berbers who were never recognized as equals, despite their Islamization; lower in the scale came the mullawadun converts and, at the very bottom, the dhimmi Christians and Jews.

This is all of course much to much for the likes of Burg and the media patrons that regurgitate his nonsense, because after all, it’s that pesky Zionism that’s at fault right, not the anti-semitism that has for centuries driven Jews from one section of the globe to the other.
With useful stooges like Burg handy, the Finnish media can then feel free to wash it hands of any guilt for its bastardization of the reporting on the Arab-Israeli conflict, whose style of reporting is steeped in anti-semitism, in which anything the Israelis do or don’t do, will be taken as a sign of their immense evil nature. It’s no wonder why then the Helsingin Sanomat chose Avaraham Burg as the correct author to review on such a solemn day, he was just to good to pass up. KGS