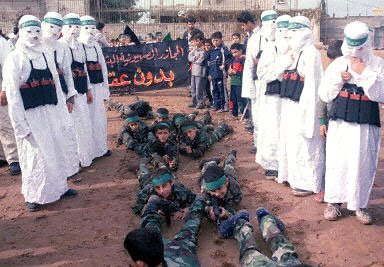 An examination of three different documents — the Hamas Charter (August 1988), Hamas’ Political Platform for the election to the Palestinian Legislative Council (January 2006), and the Palestinian National Reconciliation Document, also known as the (updated) “Prisoners’ Document,” (June 2006) — shows that Hamas adheres to an ideology that rejects recognition of Israel and a peace agreement with Israel, and that Hamas also rejects the recognition of political agreements which the PLO has signed with Israel. This is based on Hamas being first and foremost an Islamist ideological movement that has clear red lines rooted in its religious doctrine.

However, during the periods of the Hamas government and the national unity government some Hamas leaders vaguely expressed themselves in a manner that reflected a possible readiness for temporary coexistence with Israel based on the pre-1967 borders.

The Hamas Charter rejects political moves or the possibility of strategic compromises with Israel. According to the Charter, the end of the conflict will be expressed in the liquidation of the Jewish state. The Charter stresses armed conflict as the only means for liberating “the land of Palestine.” Moreover, according to the Charter, Hamas opposes any initiatives or possible moves for finding a peaceful solution.

The Hamas Political Platform for the election to the Palestinian Legislative Council (January 2006) expresses Hamas’ adherence to continuing the armed struggle in order to attain national Palestinian rights, including the “right of return.” The Platform refers, among other things, to economic separation from Israel and avoiding normalization with Israel. However, the Platform does not make mention of destroying Israel.

The Palestinian National Reconciliation Document in Paragraph 7, that deals with “political negotiations and ratification of agreements,” states that the PLO and the Chairman of the PLO have the authority for conducting negotiations, but any agreement must be approved by the new Palestinian National Council or by a general national referendum to be held, to the extent possible, within the homeland and among the Palestinians abroad, through a law that would arrange this.

On the basis of Paragraph 7, a political paragraph in the policy guidelines of the Palestinian national unity government (March 2007) was formulated referring to the nature of the mandate given to Mahmoud Abbas to carry out political negotiations with Israel. This item for all practical purposes empties the mandate given to Mahmoud Abbas of all content and makes the political negotiations “conditional.”

Today, in view of the antagonistic relations between Hamas and Fatah and especially since Israel’s military operation in the Gaza Strip, Hamas rejects in its statements the principle of political negotiations with Israel.

Hamas’ View of Contacts with Israel

Hamas, which is bonded with the Moslem Brotherhood, distinguishes between three kinds of possible contact with Israel.

1. Permanent Agreement (which would include political gains for Israel). This is absolutely opposed by Hamas. From the standpoint of Hamas, there is an absolute prohibition against giving Israel legitimacy for sovereignty over Moslem land. Based on this, there is no possibility of Hamas reaching a formula for ending the conflict.

2. “Hudna” (a long-term ceasefire according to the model in Islam – the Hudaybiyyah Treaty which Mohammed signed with the Khureish tribe for a ten-year period, but which was violated after two years). This is a form of conflict management until Hamas would become strong enough to confront Israel and defeat it.

The main conditions for this kind of “Hudna” would be an Israeli withdrawal to the pre-1967 borders and Israel’s giving-up Jerusalem, and fulfilling “the right of return in its entirety” in keeping with the Palestinian interests. (In some of the Hamas texts, mention is also made about the freeing of prisoners.) These are pre-conditions that are not subject to negotiations.

3. “Tahadiya” (according to the parameters that were set in the agreement, mediated by Egypt in June 2008, for a period of calm between Israel and Hamas). In this case too, the period of calm is to be used for an arms buildup and for strengthening Hamas vis-à-vis the interests of the Palestinian public (border crossing points, removal of the Israeli “siege,” etc.).

Whether a “Hudna” or a “Tahadiya,” understandings or agreements are to be reached through a third party and not through direct dialogue with Israel.

During the period of the Hamas government and the period of the national unity government some leaders of Hamas (both internally and abroad) gave expression to a somewhat more pragmatic and less intransigent approach, primarily in their interviews to the foreign media. We believe that this derived from Hamas’ interest to obtain Arab and international legitimacy, as well as from an attempt to calm the fears of the moderate Arab countries regarding Hamas’ closeness to Syria and Iran.

The various Hamas spokesmen (including Khalid Mashaal) refer to flexibility on the following matters: