Skip to content
Home
/
2009
/
January
/
26
/
Uncategorized
/
Lars Vilks Sends the Tundra Tabloids a Special Edition Cartoon For the Gates of Vienna…….
Facebook
Twitter
Google+
LinkedIn
Pinterest
The Gates of Vienna & a Mo-hound
UPDATE: The Baron has published his post on the Lars Vilks cartoon. read it.
Last year the Tundra Tabloids visited Stockholm to witness the Day For Free Speech event, sponsored by the Swedish Humanist Society, in which Lars Vilks, addressed both his critics and supporters, concerning the ongoing art work project called the “Mohamed as a Roundabout dog”.
The following cartoon can be considered a part of that ongoing project. The esteemed cartoonist said last year in November that he was willing to consider drawing a special Mo-toon for Baron Bodissey of the Gates of Vienna. The Baron had requested a special picture of John Sobieski, the hero of the “Battle of Vienna” riding his horse in victory accompanied by the famous Roundabout dog. Well Mr.Vilks just sent the TT via email his most recent work, the completed picture of
John III Sobieski alongside the Mohamed as a Roundabout dog. 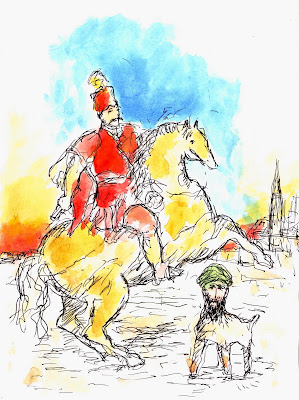 The project continues, and I’m sure that Lars Vilks is watching quietly from the sidelines observing what will come next. KGS
NOTE: View the TT’s video of the interview with Lars Vilks, as well as the transcript.
NOTE: The Tundra Tabloids will be publishing all comments concering the John III Sobieski and Mo-doggie as they appear in the comment box.
Freethinker2308: “Hahaha Muhammed looks absolutely flabbergasted as if struck by the awkwardness of the situation, wishing he were somewhere else. Hilarious! Nice picture lol.”
Anonymous: sheesh! at least they could have done was put little slippers on mo-mo…isnt he cute! come mere little momo poochy, you want a boney?