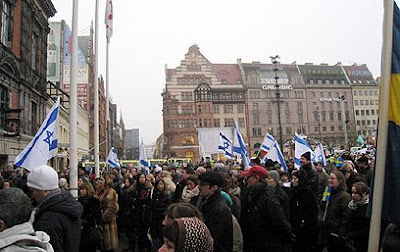 UPDATE: A Source says the SD party was not involved in the organizing of the pro-Israel march. If more info comes my way, I’ll update this post. KGS

The philosemitic and pro-Israel, Swedish Democrats party, were among those marching in support of the Jewish state. As a matter of fact, they are the only party in Sweden that is outspoken in its support for Israel, yet get maligned as being fascists.

YNET: A pro-Israel rally in Malmo, Sweden was torn apart Sunday by pro-Palestinian residents who arrived on the scene with eggs, bottles, and tear gas grenades which they threw at Israel’s supporters. Police dispersed the entire crowd. Seven hundred people took part in the rally in support of Israel, which was held at the city’s main square. It was organized by Malmo’s Jewish community and Sweden’s Democratic Party.

Protestors carried signs that said ‘Stop eight years of Qassams’ and ‘Peace for children in Israel and Gaza’. The organizers received a police permit for the demonstration. However, a number of pro-Palestinian protesters who did not have a permit to demonstrate took to the streets in retaliation to the approved rally. They were not dispersed by police despite lacking a permit.

“At some point, about a half an hour after the protest began, pro-Palestinian protesters began to throw eggs, bottles, and even a tear gas grenade,” Elad Meier, a Bnei Akiva and Jewish Agency envoy to Sweden, recounted.

Meier added that the lawless protesters disconnected the speakers brought to the square by the Jewish community while its leader was speaking. The act brought the pro-Israel rally to an end, as others could not speak.

That’s what these modern day Black-shirts do, intimidate and threaten those with whom they disagree. It’s no wonder that the Left and the Muslims and even the neo-Nazis have such so much in common, their MO’s are almost identical. 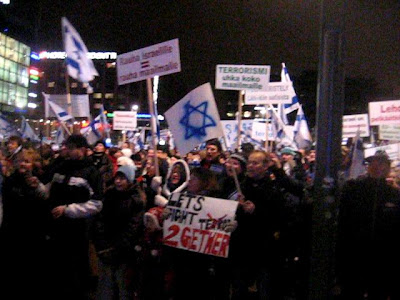 One thing worth remembering, is that Finland had arranged its own pro-Israel march last month, WITH NO PROBLEMS AT ALL. There were only a few somalis spiting on the ground and a couple of hecklers. It’s not by accident it was peaceful, we do not have the Muslim numbers that are in Sweden, and if and when their numbers reach critical mass, we will face the same kinds of problems. KGS