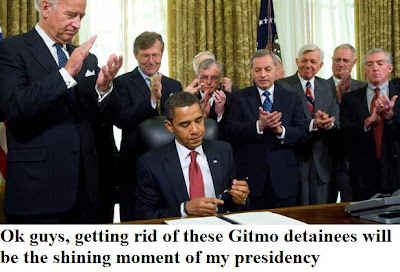 UPDATE: Two more ex-Gitmo inmates show up in Al-Qaida videoWho would have figured huh?! Actually one of the jihadis is the already mentioned, Al-Shiri. WRONG. The US has said all along that these terrorist detainees are the worst of the worst, and with the stroke of a pen the US will farm them all out across the globe. If the US is not able to withstand international pressure in keeping them locked up in Gitmo, you can bet that other states receiving them will fare no better in keeping them permanently locked up.

BEIRUT: The emergence of a former Guantánamo Bay detainee as the deputy leader of Al Qaeda’s Yemeni branch has underscored the potential complications in carrying out the executive order that President Barack Obama signed that the detention center be shut down within a year.
The militant, Said Ali al-Shihri, is suspected of involvement in a deadly bombing of the U.S. Embassy in Yemen’s capital, Sana, in September. He was released to Saudi Arabia in 2007 and passed through a Saudi rehabilitation program for former jihadists before resurfacing with Al Qaeda in Yemen.
His status was announced in an Internet statement by the militant group and was confirmed by a U.S. counterterrorism official. “They’re one and the same guy,” said the official, who insisted on anonymity because he was discussing an intelligence analysis. “He returned to Saudi Arabia in 2007, but his movements to Yemen remain unclear.”
The development came as Republican legislators criticized the plan to close the Guantánamo Bay detention camp in the absence of any measures for dealing with current detainees. But it also helps explain why the new administration wants to move cautiously, taking time to work out a plan to cope with the complications.
Almost half the camp’s remaining detainees are Yemenis, and efforts to repatriate them depend in part on the creation of a Yemeni rehabilitation program – financed in part by the United States – similar to the Saudi one. The Saudi government has claimed that no graduate of its program has returned to terrorism.

Yeah riiiight! How do you reeducate a terrorist jihadi? Stick him in a camp run by Wahabbists! KGS