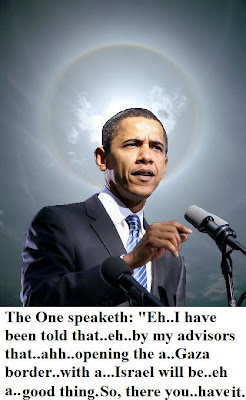 Well, Israel can expect even more ludicrus ‘suggestions’ coming from an Obama White House, seeing that he’s surrounded himself with all of the soured creme de creme of Middle East advisors. These types just don’t learn do they? As long as they insist in pandering to the notion that (influential) moderates exist inside the PA that Israel can work with, the more they put the Jewish people at risk for another disaster.

They do not go to the core root of the problem, which has NOTHING to do with Israel’s legal occupation within sections of the disputed territories inside the West Bank, but everything to do with the fact that Islam refuses to end its jihad against the Jewish state. The Hamas only speak out loud what the rest of the Palestinians say in private.

Instead of talking about final settlements ending in the creation of another Palestinian state, the IC should be demanding to see viable proof on the ground that the Palestinian society is moving towards being a normal society that’s built upon solid foundations of the rule of law, sound democratic institutions in place and operating, basically having everything up and ready to go for a state of their own. You know, like the Jews did with the Yeshuv becoming a de facto state with hardly any transition problems at all, and that’s including a full scale war being launched against the Jewish state by five Arab armies from the very beginning of its existence.

President Barack Obama urged Israel on Thursday to open its borders with Gaza.

The plea came in a speech that signalled the new US administration’s shift from Bush-era policy on the Middle East and the world as a whole. In a high-profile address on his second day in office, just hours after he signed an executive order to close the centre at Guantánamo Bay, Mr Obama proclaimed that the US would “actively and aggressively seek a lasting peace between Israel and the Palestinians” in the wake of this month’s Gaza war.

“The outline for a durable ceasefire is clear: Hamas must end its rocket fire: Israel will complete the withdrawal of its forces from Gaza: the US and our partners will support a credible anti-smuggling and interdiction regime, so that Hamas cannot re-arm,” the US president said.

“As part of a lasting ceasefire, Gaza’s border crossings should be open to allow the flow of aid and commerce, with an appropriate monitoring regime, with the international and Palestinian Authority participating.”

Again, the new administration will become quickly mired in the quicksand of Palestinian double talk and underhanded skulduggery, as they trot out old, worn out ideas and present them as being “new and fresh” ideas on how to solve the “mother of all conflicts”, which it ain’t. The Kashmir territorial dispute between India and Pakistan has been broiling as long as the Israeli-Arab conflict, and yet life continues.

President Obama and the advisors he surrounds himself with believe the fiction that “solving the Palestinian problem” will end up solving all other problems in the ME as well. Well like I just said, it’s fiction, because it’s based on the premise that the Arab ME actually care about the Arabs that parade themselves as Palestinians, they don’t.

Sudan’s genocide in Darfur, Algeria’s long running battle with fundamentalist Islam, Iran’s war with Iraq and a host of other conflicts in the region have absolutely nothing to do with Israel, nada, not one bit, but yet the Leftist loons, and those on the Right in which they manage to dupe, believe it’s so. well believing is one thing, and reality is another. KGS