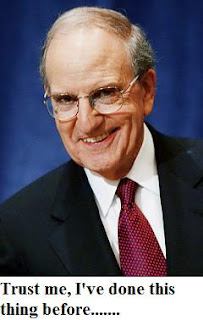 Delusional. Here’s another reason why intelligence does not automatically serve as an indication of a person’s thoughtful use of common sense. George Mitchell, who’s being touted as Barack Obama’s Middle East envoy, believes the key to solving the Arab-Israeli conflict lies in past negotiations between the Brits and the IRA.
J’lem Post: “The peace agreements reached in Northern Ireland are proof that “there is no such thing as a conflict that can’t be ended,” George Mitchell, the man widely touted as US President Barack Obama’s choice for new Middle East envoy, told The Jerusalem Post last month.

Mitchell, Washington’s special envoy to the Northern Ireland peace negotiations that led to the Belfast Agreement in 1998, spoke to the Post during a visit here last month to take part in a conference on US-Israeli relations at Tel Aviv University’s Institute for National Security Studies (INSS).

“I understand the people in the Middle East are discouraged,” Mitchell said. “I understand your feelings. But from my experience in Northern Ireland, I share the feeling that there is no such thing as a conflict that can’t be ended. Conflicts are created by human beings, and can be ended by human beings. It may take a long time. But with committed, active and strong leadership, it can happen here in the Middle East.”

Like I said, the man is delusional. What Mitchell carefully avoids, because it would severely crimp his plans, is that Hamas, and to an almost equal degree, Fattah, are not interested in ending the conflict. Hamas is dedicated to Israel’s destruction, something that Fattah in principle agrees with but due to wanting to curry favor with the West, continue with their appearance of being the moderates.

Setting that aside, Hamas is by its own stated political guidelines and religious fanaticism, is incapable of committing to a final agreement with the Jewish state that it believes is defiling Muslim land. For Hamas to accept Israel, would mean for it to reject itself, which is laid out in its charter for all to see. Any attempt to equate the IRA (which Mitchell does) with Hamas, is sheer ignorance and stupidity, and remember, this is coming from a career diplomat who should know better. Reading the comments to this J’lem Post article, I came across this statement, that effectively reduces Mitchell’s argumentation to being nothing more that fanciful thinking.

“I wonder how easy George Mitchell would have found the negotiations over Northern Ireland if the IRA were a fanatical religious cult sworn to Britain’s destruction, and convinced they’d each (IRA members) would get 72 pints of Guinness from God upon martyrdom?”