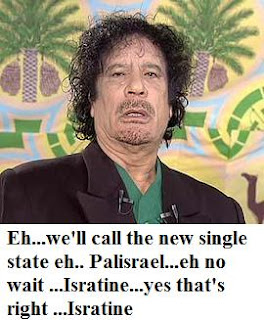 The years of toking on the hookah has finally taken its toll on the desert rat king, as Gaddafi took the liberty of addressing the new US president in a speech that was aimed to help Obama reshape the geopolitical map … in favor of the Arabs of course.
Why shouldn’t he be optimistic of his chances of getting his opinions being heard? Obama himself set the tone of which way the political wind will be blowing from here on end, in his first ever telephone call as acting US president to Mahmoud Abbas, Israel came in second.
Also worth noting was the statement in his inauguration speech that the US is a nation of Christians and Muslims …. Jews came in third … so it looks like the beginning of a trend. Having a token Jew as chief of staff is of little comfort, especially when he’s of the ultra-liberal sect who will most likely be willing to sell Israel the short end of the stick in order to placate the Arabs and Islam.
Though Gaddafi’s call for Israel to be dismantled and a single state rise from its ashes is down right loony, other as equally damaging proposals are being formulated by this administration that will most certainly work against Israel’s self interests. Obama has promised change, and the US Democrats are feeling mightily empowered at the moment to inflict that change upon Israel.
Gaddafi suggests new state called ‘Isratine’

In a speech outlining his views on how to resolve Israeli-Palestinian conflict, Libyan leader calls for creation of one state rather than two nations living side by side. He also advises US President Obama to give Osama bin Laden a chance to reform[…]Speaking to students at Georgetown University via a satellite link-up from Libya, Gaddafi said Washington must review its approach to bin Laden, who is blamed for the September 11, 2001 attacks and tops the US Most Wanted List.

“Terrorism is a dwarf not a giant. Osama bin laden is a person who can be given a chance to reform,” Gaddafi said through an interpreter. He gave no indication that he had any contact with bin Laden or wanted to act as a go-between.

“Maybe we can have a dialogue with him and find out the reason that led him in this direction,” he added.

What in the world was the faculty of Georgetown University thinking by linking up with Gaddafi in the first place? Dialogue with Osama Bin-Laden? But then again, it does in fact dovetail with Obama’s mantra of wanting to negotiate with the US’s enemies, even though they haven’t any reason to change or moderate their positions.
Obama seems to find value in wasting American clout by chasing after religious supremacist whack-jobs to see if some kind of a deal can be made with them. Try as he may, but in the end, such foolhardy policies will backfire, tyrants and Islamofascists will not keep their word with the infidel, and we will be back to square one. Hopefully the damage done by an Obama administration can be repaired by his successor. KGS