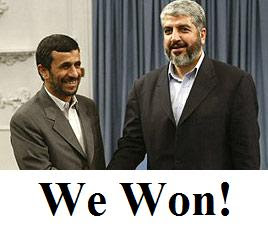 In the sense that Israel is pulling out of Gaza with Hamas still maintaining a viable network of Qassam launching terrorists, perhaps their jubilant expressions aren’t too misplaced.
In order to defeat one’s enemy thoroughly, they have to be so thoroughly demoralized and downtrodden, that they dare not lift a note of defiance. They must appear to be beaten, and beaten badly beyond any shadow of a doubt.
What’s happening instead, is the setting of the stage for another round of fighting, thanks to the efforts of the international community, who have once again saved a genocidal, religious supremacist movement from utter destruction. Somehow they see a value in keeping Hamas and Hezbollah alive as a movement, which only goes to show just how much contempt they have for the Jewish state. KGS
Ahmadinejad congratulates Mashaal on ‘victory’
Iranian president telephones Hamas politburo chief, stresses Palestinian organization must exert pressure for full Israeli withdrawal from Gaza, prosecution of ‘Zionist criminals’ […]
According to the report, Ahmadinejad telephoned Mashaal and told him, “This is only the beginning of victory.” He added that “pressure must be exerted for a complete withdrawal” of the IDF soldiers from the Strip and for the opening of the Gaza crossings.