From the dumber than dirt department:
The blogger Pikkupoika brings to the Tundra Tabloids’ attention an interesting observation about a photograph that was included in a YLE article Gazan hyökkäyksen uhriluku jo lähes 900 today, that reveals the amazing stupidity of this branch of the Finnish media. (Click here for enlargement)

When clicking on the picture included in the article, an interesting thing comes to light, the dopes at YLE label the photo as a “rypälepommi” = cluster bomb in Finnish, when in fact it’s anti-missile flare. 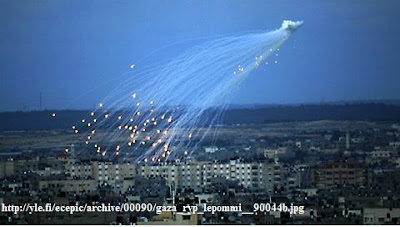 The person who actually shot the picture, EPA / Mohammed Saber did not mention cluster bomb at all in the caption he sent to the main office. Pikkupoika correctly observes:“you don’t need to be a military expert to see that that is not the case with the photo, but let’s see the original source. It is coming from here. Details:Image number:00000401596478
Photographer:MOHAMMED SABER
show all images of this author
Image Size (uncompressed file size):2710px x 1749px (14MB, 22cm x 14cm)
Date created:11.01.2009
Caption: epa01596478 Smoke rises following an Israeli missile strike in Gaza City, Gaza Strip on 11 January 2009. Israel’s ongoing attacks on Hamas targets in the Gaza Strip have claimed almost 900 lives. EPA/MOHAMMED SABER So by hook or by crook, the dopes at YLE, either knew better but classified it as a cluster bomb anyway because they want to demonize Israel, or stupidly classified is as a cluster bomb because they can’t tell their arse from a hole in the ground. You choose which scenario it was yourself. KGS

H/T: Keisarin uudet vaatteet UPDATE: Down the memory hole it goes, as YLE gets wise (from a TT reader) and changes the caption from this:http://yle.fi/ecepic/archive/00090/gaza_ryp_lepommi__90044b.jpgto this:http://yle.fi/ecepic/archive/00090/gaza_ilmaisku_90044b.jpgNOTE: One thing worth knowing, YLE still refuses to break down the casualty list between civilians not involved in the fighting and those who are. So the headline still reads 900 killed, while they take note of three Israeli civilians dead and ten soldiers. See how they work?UPDATE: OK, now the article is updated to read 905 killed, at least 380 are civilians, but who’s to say how accurate their sources are?Dominic Lawson states in a Timesonline article that: Those who claim the IDF also deliberately targets civilians don´t have to believe the official spokesman´s denials: they could speak to someone such as Colonel Richard Kemp, who commanded British Army campaigns in Afghanistan and Northern Ireland, and was most recently senior military adviser to the Cabinet Office. Kemp told me that “Hamas deploys suicide attackers including women and children, and rigs up schools and houses with booby-trap explosives. Its leaders knew as a matter of certainty this would lead to civilian casualties if there was a ground battle. Virtually every aspect of its operations is illegal under international humanitarian law – `war crimes´ in the emotive language usually reserved for the Israelis”. Colonel Kemp points out that if the IDF had no regard for civilian lives it would never have leafleted and telephoned residents in Gaza, warning them when it was about to attack their area: after all, that also gives Hamas notice – hardly the act of an army devoted to military victory at all costs. Similarly, the IDF´s unilateral commitment to a daily three-hour ceasefire to permit the evacuation (to Israel) of casualties, and for the passage of “humanitarian aid”, also allows Hamas time to regroup and redeploy for future attacks.