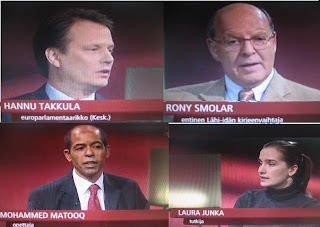 In the Tundra Tabloids opinion, it couldn’t have gone any better for Israel, though it’s a shame YLE couldn’t have come up with more suitable opposition on the Palestinian side, it would have led to a more intellectual debate.
But, in last night’s exchange of thoughts and opinions on Finnish YLE’s A-Talk, both MEP, Hannu Takkula and former foreign news correspondent, Rony Smolar, stated the case for Israel very eloquently.
Opposing, were the weak tag-team of a teacher born in Syria but presented as a Palestinian, Mohammed Matooq, and Laura Junka, a free lance photographer and journalist who is one of the more widely known Finnish activists for the Palestinians.
This is probably the ony time that the Israeli position will be seen in any significant way, and as I said before, the team of Takkula and Smolar, handed things brilliantly. When Israel withdrew from Gaza, it left much of its infrastructure in tact, with whole green houses being turned over to the Palestinians in hope that if taken seriously, they will sieze the chance to begin building for themselves a better life.
Also, that Israel was forced to act against Hamas’ Qassam attacks, that Hamas is to blame for the suffering of the Palestinian civilians, and that they have been using their people as human shields, in a very densely populated area. What they both said in addition to that, is what you have seen here on these pages, so there is no reason to go over everything.
The talking points offered by both Matooq and Junka however, came across as rather shrill and lacking in any depth, being more on the attack and at some point, bordering on desperation and hyperbole and farcical rhetoric.
At one point, Matooq leveled charges that Israel is using phosphorous shells against the Palestinians, not even the host of the talk show, Jan Andersson, could let him slide with that one, asking him from where did you get that information? Junka pops in “well it’s too difficult to say in such difficult circumstances to say just where the information is coming from. well I have seen it on the Internet being mention”.
Remember, this is a free lance journalist speaking.
It all went down hill from there, with the final statement coming from Hannu Takkula, about Hamas wanting it all, from the Jordan to the sea, leading into the final question of the evening: Andersson: “one or two state solution?”
Junka: “I want a single state. where there isn’t a Jewish state, Muslim state nor a Palestinian nor a Israeli state, but something for everyone.” Smolar: “oh that kind of utopia was thought of before”. Matooq: “I want a single state as well.” Takkula, “Israel has a right to its own state”.
Well, any such a question is an automatic affront to Israel, no one has the right to decide the national character of a sovereign state, besides, Israel already is a state, and has been one for 60 yrs.. So it’s both highly ridiculous and insulting for the question to have even been asked in the first place. What’s in question is whether or not a Palestinian state should be brought into existence at all, especially since its plain to see that they are no where near ready for such an undertaking, if ever. Pehaps a greater Jordan and Egypt is more preferable to an entity run by terrorist thugs and gangsters. KGS
Related: Kumitonttu sent the TT the following information about a Communist Norwegian doctor, “mad” Mads Gilbert, who has in fact, two professions running side by side.
One is being an anesthesiologist, and the other is being a full time propaganda peddler and apologist for Palestinian terrorism. As a matter of fact, I had just seen a YLE film clip the other day in which Gilbert was peddling one outrageous statement after another, and it appears that he has been doing it for some time now.
Gilbert was asked by Dagbladet newpaper (Sept. 30, 2001) “whether he supported the terrorist attack on the U.S., he replied: “Terror is a bad weapon, but the answer is yes, within the context I have mentioned”.
So it doesn’t surprise that Gilbert is somehow connected to the information “floating around the blogosphere”. But hey, even in the event Israel is using similar shells for smoke screens to cover troop movement, it does not mean that Israel is using these weapons against the civilian population, or that they are illegal.