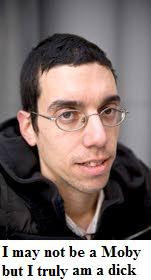 Just Call Me Ishmael, loon, and Left-wing moonbat ex-pat Israeli traitor. Makes you want to wretch your guts out when seeing turncoats like this moron filling the pages of foreign paper with utter nonsense and self hating muck.
Ishmael Falke has been living in the southern Finnish coastal city of Turku for about nine years, and though he’s been away for so long, one thing has remained, his loathing for the Israeli government. It’s so much so that he relishes the chance to prove it in an interview for the Turun Sanomat.
Ismael Falke: -The Israeli state bombing Gaza, and Hamas, are each playing a role, in which both parties have the same agenda: to continue the conflict. Both parties will benefit from the situation, because Israel is able to test its weapons, and Hamas can gain more support. Overall responsibility for the situation is, however, Israel, which must cease its military operations immediately. […] Israel has doen all it can to make the Palestinian’s feel like they are second class citizens”.
The man is just spouting boiler plate propaganda. The trouble with this failed logic is that he fails to mention the religious supremacist dynamic to Hamas’ own agenda, the guy knows better. While no liberal democracy is perfect, Israeli Arabs fare better than any of their neighbors elsewhere in the Middle East. But when ideology trumps fact, he feels no embarrassment in publicly urinating on himself. KGS
COMMENT: TINSC states it: “There’s no trick to finding a Jew or several Jews who hate Israel and/or their fellow Jews. As such, the LIB media often finds these Jews to “speak on behalf of the Israeli viewpoint”. When I see that, it’s a dead giveaway that the news reporter is biased against Jews and/or Israel (depending on the subject).