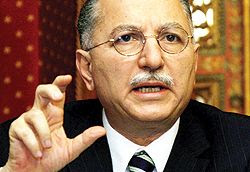 İHSANOĞLU: “We’re that far away from finally getting the Zionist entity in our cross hairs, just wait until Geneva, Durban II will make Durban I look like a pro-Israel love fest.”
The UNWRA run school in Gaza was the scene of major blood letting yesterday, in which Palestinian Hamas terrorists fired mortars at Israeli troops from the vicinity of the school.
IDF forces returned fire in the direction of the men involved in the launching, killing them, as well as the explosion setting off a secondary explosion of munitions that were on the premises of the school. But that won’t suffice for the anti-Israel UN and OIC, they’ll take the word of murderous religious supremacists first, and hope that they right, or at least partially right.
UN rejects IDF claim Gaza militants operated from bombed-out school

Haaretz: “The United Nations on Wednesday denied Israel Defense Forces claims that there were Palestinian militants in the Gaza school bombed by Israel on Tuesday. Christopher Gunness of the UN Relief and Works Agency (UNRWA) said the organization is 99.9 percent certain there were no militants or military activity in its school. […]

Meanwhile, a top world Islamic body accused Israel on Wednesday of war crimes in its Gaza offensive and said it should face an international court after the school attack. “This is a brutal crime and a clear war crime, along with other attacks, and its perpetrators must not escape an international trial,” Ekmeleddin Ihsanoglu, secretary-general of the Organization of the Islamic Conference (OIC) said in a statement. The 57-nation OIC, based in Jeddah, represents over one billion Muslims. The body, whose charter dates back to the early 1970s when Islamic nations were divided along the lines of the Cold War, has little political power.

MK: Only 8-10 Killed in School
IsraelNN.com) MK Silvan Shalom said that he learned from the IDF that only 8 to 10 people were killed in the IDF’s strike on a UNWRA school Tuesday. Media reports have said that over 40 people were killed in the incident. Shalom also said that the school had explosives inside of it. He said that many of the dead were killed by secondary explosions.
Witnesses: Hamas fired from school
Two residents of the area near UN school that was shelled by the IDF on Tuesday said that they had seen a small group of terrorists firing mortar rounds from a street close to the school. The two spoke with The Associated Press by telephone on condition of anonymity for fear of reprisal.
TT: And what’s the IDF to do about the dead Hamas terrorist Askar brothers who were launching the mortars? Breathe life back into their bodies and send them on their merry way?
Hamas booby traps kill people gathered in UN School
The Israel Defense Forces issued a statement saying the school grounds were used by terrorists to fire mortar shells at the troops. According to the IDF, among the dead were members of a Hamas launching cell, including operatives Immad Abu Askar and Hassan Abu Askar.