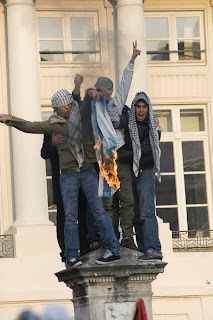 Esther writes the following about what went on yestrerday in the Belgian city of Antwerp, where Muslims protesting Israel took to the streets in the hundreds to hound Jews in the Jewish section of the city. 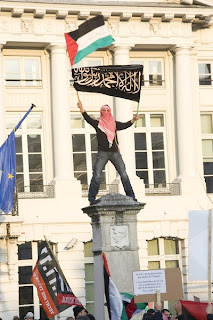 Islam in Europe: Several thousand protesters (7,000-10,000) gathered at the Martyrs’ Square in Brussels to demonstrate against the Israeli attacks in Gaza. The square is a national cemetery and soldiers who died in the Belgian Revolution are buried there. Today it is a place honoring all those who fought for the freedom of Belgium. The Flemish government offices are located there.

Esther also mentions a letter that was being passed around that promoted incitment of Jews, and appears to have been the handiwork of the Arab-European League (AEL).

Islam in Europe: “Indymedia also has pictures from the Antwerp demonstration, organized by the Arab-European League (AEL). One of them is of this letter, which is just barely legible. It starts off saying that “the Jews have again perpetrated attacks in Gaza against the Palestinians”, quotes Ehud Olmert as saying that this is just the ‘first phase’ and then reminds the readers that Muhammed said that one day the Muslims will fight the Jews and that you should not ‘take the Jews and the Christians for friends; they are friends of each other’. “Stop the violence, stop the massacre“.

In a later post, Esther states that the AEL denies having authored the letter: “This letter is unsigned and it is of course impossible to know how many were given out or who was responsible for it. However, by telling the reader that redemption will only come when the Muslims fight the Jews, it certainly sets the tone for what happened next.”

The Vlaams Belang, the most vocal pro-Israel political party in Europe is the only group willing to make a stand against these thugs, and yet the political Left still gets a free pass though they align themselves with these very anti-Semitic supporters of violence and mayhem. Disgusting. KGS