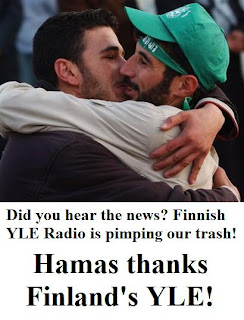 You can’t make this stuff up if you tried, really. YLE has been laying one hot and steamy pile after another ever since Israel was forced to take action against the genocidal maniacs of Hamas last Saturday.

Both Kumitonttu and Vasarahammer notified the TT in the morning about the YLE radio interview, so I took the time to transcribe just a portion of it, because the rest of the interview was just more of the same type of “boiler-plate ad hominen attacks” against Israel that’s a daily feature at that “news” organization.

It wouldn’t surprise me one bit if they had Hamas and Palestinian flags draped on the walls of the YLE studio.

Petri Kejonen: Soon we will be talking about the war situation in Gaza. Israel has continued bombing Palestinian areas, and Hamas who rules the area, is not giving up. We have an eye witness on hand who just returned from the Middle East, Tapani Kujala. Finland’s Red Cross representative, Kalle Löövi evaluates the humanitarian needs.

Now we’ll speak about the Gaza crisis, in our studio we have YLE Radio’s (unclear) Tapani Kujala, good morning.

Tapani Kujala: The situation is such, that I was there as a media researcher working a doctorate paper on the media war, as part of the Middle East war, I met Palestinians and Israelis working in the area as journalists, researchers and press secretaries.

Petri Kejonen: How are they reacting to the present situation?

Tapani Kujala: The reaction, well, when I had met with them, the situation hadn’t happened yet, everything happened rather quickly, but this is nothing new, in the in the ME conflict. We have seen this type of situation before, perhaps not as extensive of a strike as now, but smaller comparble strikes have happened before. So there is nothing new in that. There are many matters involved, perhaps is good to look back to 1995 and afterward, in 95′ we spoke about the Oslo process when the peace process started, but if you wnat to analyze the past years, then there are now alot of typical similarites that have happened before.

Always when there seems to be a light at the end of the tunnel, peace is attainable, there is now something happening, pressure from the international community is on both parties to work for peace, always then, in a way, there is always a clamping down on the life within the Palestinian areas, that in a way, the pot begins to boil over in center of desperation.

Young men take to their rockets, guns or suicide strikes. It gives the Israeli army a reason to act. And the Israeli army is acting rather strongly, strongly, and it takes the situation further away from peace, far from a negotiated settlement for the future of the region. [TT: Remember, it’s always the Joooos’ fault, never the Arabs. Forget about Israel stupidly reviving Arafat’s terrorist/political career that was wasting away in Tunisia, arming his men and allowing them to set up camp in their back yard.All the money they dumped on them, and time spent allowing the Palestinians reign in on terror, while Jews were being murdered. No, these two Finnish dim wits would rather pontificate on how evil the Israelis are.]

Petri Kejonen: Hamas is being fed, that it stays angered, at war and hostile? [TT: See how it’s done? It’s Jews’ fault that Hamas wants to destroy Israel.]

Tapani Kujala: Eh…yes, you could ask to whose advantage does it serve? When I saw and I listened to Dosentti (Senior Lecturer) Multanen interviewed earlier, it strongly serves to Israel’s advantage, that no clear pressure will be exerted that peace will come early.

And also important is the background, Hamas is not only a terrorist organization, Hamas has a solid background in social work, in does work in schools, it is also very popular, especially in Gaza. You also have to recognize it won parliamentary elections in the Palestinian areas, even the international community has difficulties in understanding Hamas’ character, also in the background, is Hamas’ being Israel’s creation, when the PLO was considered to be too strong of an organization, Israel supported very strongly Hamas with aid. The Hamas began to act in way that was not hoped for. So these backdrops have to be factored into the situation.[TT: Don’t forget the Hamas’ much vaunted “social work”, it’s great to have healthy bodies to place in harms way when the sh*t begins to hit the fan. Like Hezbollah, these social welfare networks are the same as Al-Capone’s social hand outs when Chicago was ruled by the mobsters.]

You get the picture.

The interview went on further to add that Israel is guilty of massacres, the rockets fired into Israel are no big deal, the equivelent to the fire works set off in Finland for the new year. The two Israelis dead compared to the three hundred Palestinians is somehow supposed to dictate who is the villian and whose the victim, though the overwhelming percentage have been armed Hamas members. The whole interview can be summed up as:

“Oh how I hate Israel, just let me count the ways“.
Mind numbing. How in the world can you take these supposedly highly educated “professionals” seriously? Are they totally clueless to Hamas’ religious supremacy that’s grounded in the Koran, as well as their genocidal aims, or are they just willingly turning a blinded eye to it all? I think it’s the latter, because there is absolutely no excuse for their “not knowing”.
Here we see humanitarian racism in full display, with highly educated people more than willing to “attribute an intrinsically reduced responsibility to a people of a certain ethnic or racial group for their actions.” (Dr.Manfred Gerstenfeld). In this case it’s Finnish journalists releaving the Hamas from the moral responsibilty for their war crimes and genocidal intentions. It’s sick to watch but that’s what is happening. KGS
Note: The media is biased, bank on it.
The real Hamas
PA daily: Media are manipulating Gaza news
Cameraman to mourning mother: “Hit your face, cry, do some action”
A Palestinian journalist has complained that the media and others are manipulating the images going out to the world: “A mother of one of the martyrs stood by the door of the intensive care unit while crying… relatives and those around her were telling her what she should say to the television cameras: ‘Say your son [before he died] prayed and went out.’
Another tells her: ‘Curse the Arab leaders’… The journalists [in the hospitals] are going overboard in their insensitivity and taking advantage of the [difficult] moments, with the explanation that they are showing this to the world. One cameraman told a mourning mother: ‘Hit your face, cry, do some action.'” [Al-Ayyam, December 29, 2008]
Via Palestinian Media Watch.