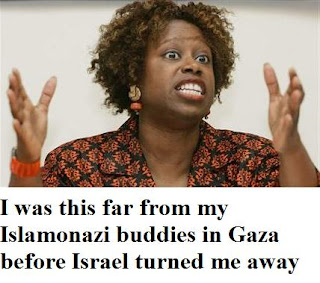 Mama moonbat: “I could just barely see their sad eyes in their poor dusty keffiyeh covered faces, when suddenly Israel turned us around. We are all Islamonazis now”
Another reason why American voters should vet their political candidates in a more thorough way, it would save future embarrassment when they are found to be completely bonkers.
Israel turned a boat around this morning that was carrying Hamas supporters trying to enter the Gaza war zone. One of the passengers was Leftist, Cynthia McKinney, the famous former US congresswoman who punched a Capital police officer for daring to stop her because she failed to pass through a metal detector.

Ynet: International Solidarity Movement ship carrying aid, journalists, doctors making way to Gaza from Cyprus collides with Israeli naval vessel, is ordered to turn back. Free Gaza Movement says Israel surrounded ship, fired at it. An incident occurred Tuesday morning between an Israeli Navy vessel and a foreign aid boat making its way form Cyprus to the Gaza Strip. The foreign ship was notified that it was crossing into a closed military zone and ordered to retreat, but the captain did not stop and collided with the Israeli missile ship. No one was injured in the incident. Early Tuesday morning navy ships were called to stop a ship belonging to the International Solidarity Movement, which is recognized in Israel as a pro-Palestinian organization. The Israelis contacted the ship’s captain through the radio and ordered the ship to turn back. According to the Israeli Foreign Ministry, the captain of the aid boat carrying several journalists attempted to evade one of the Israeli missile ships. The Israeli ship stopped, but a collision could not be avoided.

Immediately after the incident the aid ship turned back. The Israeli naval ship offered to assist the passengers of the aid ship, who declined the offer. Israel then escorted the damaged ship until it exited the State’s territorial waters.

What they are saying with their actions, is that they sympathise with the genocidal aspirations of Hamas Islamonazis. These people are beyond hope or reach. KGS