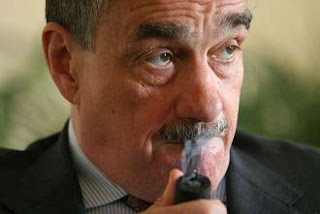 Signs of Intelligence in Europe. Czech Foreign Minister Karel Schwarzenberg:
“Why am I one of the few that have expressed understanding for Israel? … I enjoy the luxury of telling the truth.”
It’s not by accident that politicians hailing from former Communist dictatorships who fought most of their live against the system, tend to have a more clear perspective on issues dealing with tyranny and freedom than most. KGS
INN: Czech Foreign Minister Karel Schwarzenberg, who will become the EU’s president for the coming six months, told the Mlada Fronta Dnes daily newspaper that Hamas had excluded itself from serious political debate due to its rocket attacks on Israel.
He also indirectly blamed the terrorist group for its own growing death toll by placing its military bases and gun warehouses in densely populated areas.
“Let us realize one thing,” Schwarzenberg said. “Hamas steeply increased the number of rockets fired at Israel since the ceasefire ended on December 19. That is not acceptable any more.”
UPDATE: TINSC opines: “The Czechs know what it’s like to be in the way of the advance of a totalitarian imperialist movement. Moreover, they know what it’s like to have “the free world” tell them to make territorial concessions to an advancing totalitarian imperialist movement. They learned the hard way! I’m glad that the Czechs have been outspoken in supporting Israel. It takes courage for a small country to do that.”