Yawn. This latest diplomatic initiative ended with yet another useless UN declaration being issued, and then rightfully ignored by Israel as it should be, for the council should have never issued it in the first place, because not every situation demands an immediate ceasefire. The UN Security Council however, at the behest of its non-permanent members, can be predictably counted on to issue these kind of declarations whenever it’s Israel in the cross hairs.
UNSC: “The members of the Security Council expressed serious concern at the escalation of the situation in Gaza and called for an immediate halt to all violence,” said a statement read to reporters by Croatian Ambassador Neven Jurica, president of the council. “The members called on the parties to stop immediately all military activities.”
But remember folks, regardless of what the UNSC may say or think, Hamas could care less for international law and binding declarations, and will continue to launch rockets at Israeli civilian centers, so raw force is needed to cull from the Hamas horde as many of its genocidal followers as is humanly possible.
Israel will of course take care in trying to separate Hamas terrorists from the terrorist supporting population, but civilian casualties will result, mostly due to Hamas’ own strategy of dwelling amongst the civilian population. They actually like it when their own gets hit, the bleeding heart international press will be all over it, giving their cause all the PR it needs. KGS 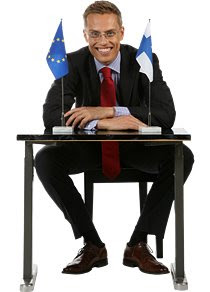 UPDATE: Finnish Foreign Minister Alexander Stubb joins the din of EU voices calling for a ceasefire.
“Finland condemns the escalation of violence in Gaza and urges the parties to calm down the situation. Finland is particularly worried about the rapid deterioration of the civilian living conditions in Gaza.

The Israeli air strikes have demanded a disproportionate amount of civilian victims and they must end immediately. Simultaneously Hamas and other extremist groups must immediately cease their rocket attacks. The parties must reinstate the truce without delay.”How soon they forget their own history. Using the very same logic, Alexander Stubb would be then forced to describe Finland’s use of force against the Soviet Union in the battle of Suomussalmi during the Winter War, as “disproportionate”. Russian losses 27,500 / Finnish losses 350-900.European politicians would be better off if they just shut their pie holes up, and tended to domestic issues like, mass Muslim immigration and the Islamization of their countries, coupled with the steady trend in severe restrictions on free speech and an increasingly anti-democratic EU that treats it’s people like serfs.UPDATE: The IDF has a video running that shows a Hamas Qassam launcher being destroyed in a residential area. One of the Qassams misfires and lands somewhere in the vicinty of a house.