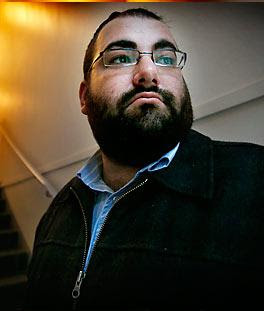 It ‘s to be expected. Here in the Leftist dominated media ‘echo chamber’ called Finland, only Jews who hate their country manage to arouse interest of the media and get a number of columns written about them.

The media loves to print highly politicized stories by outspoken Jewish critics of Israeli policies, because it dovetails nicely with their own set of biases. For you see, just like the Anti-Semite Sheikh Mohamed Sayyed Tantawi, Grand Imam of the Al-Azhar University-Mosque in Egypt, who recited from the Koran…:

…the Helsingin Sanomat believes the same about Israelis, the only good Jew is the one who condemns the Jewish state, the bad ones are those who support it. Case in point:

When senior legal advisor to the Israeli government, Daniel Taub, came to Helsinki this past February, the Helsingin Sanomat showed no interest at all in educating its readers about his/Israeli government’s perspectives on the Israeli-Palestinian conflict. The man is a walking fountain of knowledge and would have delivered an excellent interview, but the only reason why any Finn may know about his visit and his views at all, is due to the Tundra Tabloids. Period.

When it comes to Yehuda Shaul, here is a classic case of an Israeli that fits the Finnish media’s take on the Israeli-Palestinian conflict to a tee. Shaul’s message can be summed up as being nothing more than “how I hate Israel, let me count the ways. If only we (Israel) turn the other cheek then the Arabs will begin to play nice”. It’s delusional thinking, but it’s something that the media buys in to, which acts as if it believes that the Israeli-Palestinian conflict could be solved if only the Jews were to behave more Christian than the Christians themselves.

The Helsingin Sanomat’s article “Forgiveness is the only alternative” (subscription only) is insulting to the intelligence, where one is led to believe that Israel alone is responsible for all the hardships in the West Bank and Gaza, not the Arabs. Israeli government officials are addressed as “cynics” but Arabs leaders who refuse to live in peace with Israel and continue to promote violence…are well, not mentioned at all.

In the media’s mind, everything that takes place in the conflict happens within a bubble, in which Israeli military operations are not responding to anything, or acting in defense from something, they’re just simply actions to report on, as well as the potential casualties resulting from them. Yehuda Shaul has made his rounds within the anti-Israel speaking circuit for some time now, back in 2006, Shaul’s “Breaking the Silence” tour hit Santa Cruz California in 2006. Here is what some others had to say about Shaul’s speaking event.

Ernie Weiner, Executive Director of the American Jewish Committee for the Northern California Region wrote to Acting Chancellor George Blumenthal of the University of California, Santa Cruz that “this event will inevitably serve as a inflammatory exercise in blatant political propaganda.”

UCSC Professor Ilan Benjamin did likewise saying “…Although presented as an educational event, this event is not educational at all, but is rather unmitigated political propaganda which presents a single anti-Israel perspective in the absence of any context or counterpoint.”

Israeli Historian, David Meir-Levi wrote “…some academics and liberal leaders have adopted this newly revised edition of Jew-hatred as a cornerstone in their fight for ‘truth, justice and the American way’.

Wrote UCSC Hebrew Lecturer, Tammi Benjamin, “This anti-Israel event is being sponsored by two research groups and a department at UCSC. All three of these academic units have declined co-sponsorship of our (pro-Israel) speakers in the past.”

Indeed, “Breaking the Silence” has all the characteristics of presenting a very one sided approach to the conflict. Supporters of Israel understand that IDF soldiers are placed in very difficult and demanding situations, and that occasionally some of them, for one reason or another, fall short of the IDF’s strict guidelines for military behaviour. Who in their right mind would claim otherwise?
But during his presentation in Santa Cruz, it was noticed that Yehuda Shaul consistanly refused to address or to answer the questions of Palestinian violence and terrorism. Roadblocks are deemed as bad, but no word about how many lives they have saved in the long run. Again, everything happens within a bubble, the Arabs are just victims, and the Jews are their oppressors.
In this kind of anti-Israel atmosphere, it’s no wonder that the average Finn has a negative view of Israel, thanks to a hostile media that has yet to come to terms with its own anti-Semitism, no matter how much they deny it. KGS

NOTE: The same article contains a link to a story about a documentary by a Finnish film crew titled “And good will towards men” that will run on Christmas Day on Finnish MTV3. It centers around an Israeli (most likely Shaul) apoligizing to an Arab for the damage he caused to the Arab’s home due to an error in judgement with a grenade launcher.

Yehuda Shaul is once again given a stage for his one sided views, in a bleeding heart, upside version of reality.