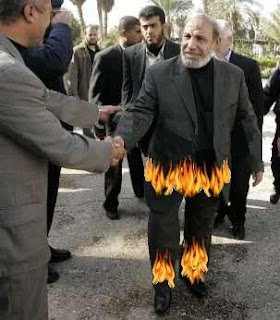 Barry Rubin: If you can understand why Hamas is ending its ceasefire with Israel, you can comprehend Middle East politics. And if you can’t, you can’t. From a Western moderate pragmatist standpoint, Hamas’s decision makes no sense for several reasons:

Returning to warfare will ensure Hamas remains politically isolated and blocks international recognition or aid that would help its cause or end economic sanctions against the Gaza Strip.

Going back to fighting makes certain that the Gaza Strip faces continued, even heightened, reductions in the material let in, thus ensuring more Palestinian suffering there. Yet Hamas is seemingly making three additional mistakes regarding timing.

The first is that they ending the ceasefire while George W. Bush is president. Certainly Israel feels freer to hit back at Hamas now than after Barrack Obama is inaugurated simply because the new administration would want to avoid a crisis before it consolidates its plans and team. Also, the United States is likely to prefer quiet as it begins withdrawing from Iraq.

Second, the ceasefire is being suspended on the eve of a major Palestinian crisis as Palestinian Authority (PA) leader Mahmoud Abbas announces a self-extension of his term in office. One might think Hamas would prefer to keep the Israel front Israel quiet for a while to focus on battling Fatah and the PA.

Finally, there’s the Israeli election campaign. While this doesn’t make large-scale Israeli retaliation inevitable, such a move would make the current government more popular with the electorate.

Therefore, Hama’s behavior, an outside observer can easily conclude, seems “stupid.” But having built a mass movement, sizeable army, seized the Gaza Strip, and built broad support throughout the Arab and Muslim worlds, Hamas may be composed of genocide-oriented fanatics but not fools. What then explains this apparently silly behavior? Here’s a case study of how Middle East politics really work: Hamas really believes its own propaganda, expecting victory despite the odds. Costs and casualties are irrelevant. The battle will go on until total victory even if that takes decades. This indicates Hamas will not moderate–the same applies to Hizballah, Syria, and Iran. At the same time, Hamas is not only indifferent to its own people’s welfare, it actually seeking to inflict suffering on them as a political strategy. The worse off Palestinians are, Hamas believes, the more likely they will fight and die. This “the worse things are, the better they are,” is the exact opposite of Western perspectives. But Hamas goes even further. It knows suffering can be blamed on Israel. Western pragmatists reason: obviously the Palestinians must prefer peace, prosperity, and statehood. Rejectionism must then be due to desperation and the lack of a good offer or faith in the West. In fact, though, the situation is not due to our mistakes but to their deliberate choices. Thus, Hamas can well conclude that the best way to put pressure on Israel and–in its own mind at least–gain Western help–is to be more radical, not more moderate. To cite one example, what is considered America’s leading newspaper recently reported that both sides violate the ceasefire: Hamas fires rockets at Israel; Israel retaliates by closing the border. By this definition, the fact that Hamas and its allies fire rockets at Israeli civilians doesn’t allow any Israeli response, military or otherwise. This is the kind of thinking Hamas seeks to promote. Then, too, setting off a crisis, Hamas expects, will draw peacekeepers like (I thought of using the word “flies” or the phrase “moths around a flame” here but rejected it) hardworking ants giving press conferences insisting that “something must be done to defuse the crisis.” That “something” usually seems to be unilateral Israeli concessions. In short, the international community may rush in to save Hamas or the Palestinians in spite of themselves. At the same time, though, Hamas believes that its intransigence and aggressiveness will increase support in the Arab and Muslim worlds. As with Hizballah, waging a war and portraying it as victory–even though the facts are otherwise–makes one a hero and attracts financing. This is also a judgment regarding Palestinian responses. More popular support can be garnered by producing martyrs than by producing higher living standards. Thus, Hamas will do better in its rivalry with the PA by fighting Israel than by fighting poverty. I am not saying this strategy will work completely but it does succeed in part. If one believes the short run is irrelevant and the deity is on one’s side, reality looks rather different. In addition, macho militancy in the Middle East does bring popularity, both domestic and international. The last quarter-century has also shown that Western sympathy can be manipulated by increasing violence and blocking solutions to the conflict in a way that will be blamed on Israel. Yet this world view is also illusory. Impoverishing one’s people and destroying the infrastructure over which one rules makes such groups weaker rather than stronger, especially as Israel focuses on material gains. Western patience with the Palestinians has waned; Arab states are not so eager to help. A strategy depending on suicide bombers is also ultimately suicidal. Ironically, too, regarding the West, Islamists cannot get away with what radical Arab nationalists can. Too many Western intellectuals, journalists, leftists, and even politicians might have been carried away with revolutionary romanticism for Fatah–seeing Yasir Arafat as merely an ugly version of Che Guevara. Far fewer see radical Islamists as heroic liberators. The bottom line is that Hamas will remain isolated and weaker than it could be if they kept things quiet, consolidated their hold on the Gaza Strip, built up their armies and base of support, and had more patience. But Hamas will also survive, ideology undiluted, able to utter war cries about wiping Israel off the map, and intoxicated with the belief it is following divine will. That’s enough for Hamas’s leadership and followers.