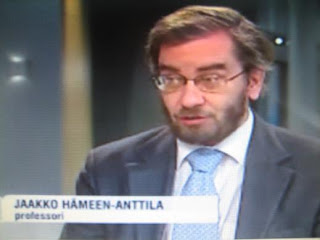 He’s back. Finnish TV’s favorite Middle East expert, Jaakko Hämeen-Anttila, stated on yesterday’s morning TV program Aamu-TV that the West shouldn’t demonize the Baath party in Iraq, since it built Iraq’s infrastructure and moulded its society.
In a Q&A period which focused on the recent report being disseminated before its official release, about the US’s 100 billion dollar failure in Iraq’s reconstruction effort, both the interviewing journalist and guest made light of the US effort in Iraq, and heaped praise on Iraq’s former Baath system, as having been the better of the two.
Aamu-TV

Annika Damström: What is happening with Saddam Hussein’s former party, the Baath party, is it really coming back to life?

Jaakko Hämeen-Anttila (smiling): Well according to the party itself, they look at Western democratic society which views that all political parties have a right organize. It (Baath party) shouldn’t be demonized, it was a regime that took care of its society for decades, it wasn’t the most ideal system, but compared to its other Arab neighbors….

Annika Damström: Well you can then look at it, that there were good things even the standard of living was better during that period…

Jaakko Hämeen-Anttila: It’s quite clear that the infrastructure was in better shape during Saddam’s time, like schools, when you look at the general area, it was very well organized. I don’t think that Saddam’s system returns, it’s just one of the Sunni population’s organizational ways.

Regardless of the failures committed in a post Saddam Iraq, it does not exonerate, or at least, rehabilitate the former regime, just because the buses ran on time. The Baath regime had much in common with Hitler’s National Socialist party (Nazi) Germany, in which the latter run its society very effectively. It’s totally disgusting to watch two Westerners reminisce about how society was organized in Saddam Hussein’s Iraq. I wonder if Jaakko Hämeen-Anttila’s and Annika Damström’s views would be appreciated by their viewers if they were uttered during the post Hitler era in the early 50’s?Damström: “What a shame Germany is still struggling to get its society rebuilt, wasn’t the standard of living higher when the Nazis ran Germany?Hämeen-Anttila: “Though the Nazi party was not the best regime to have in power, they can be praised for having invented the welfare state, and running their society like a Swiss clock.”The mentality of these two people is frightening. KGS

H/T: Vasarahammer From the comment section: Kumitonttu: “Muslims and their blue-eyed Western followers are unbelievable in what kind of society they’re aiming at. Islam is a socialistic movement itself, obviously. Muhammed was 1200 years ahead of Karl Marx. “Vasarahammer: “One of Hämeen-Anttila’s pet theme’s is the fact that while Saddam Husayn’s regime was brutal it was such only in terms of the Middle East. Hämeen-Anttila seems to ignore all the wars and persecutions (like the gassing of the Kurds) and regard Saddam’s tribal rule as some kind of norm.Damström couldn’t quite get Hämeen-Anttila to endorse Saddam’s regime but that is not a result of lack of trying. “