Skip to content
Home
/
2008
/
December
/
19
/
Uncategorized
/
Finnish Media’s PC Filters in Place as it Removes ‘Muslims’ From the Rioting in Mälmö Sweden…….
Facebook
Twitter
Google+
LinkedIn
Pinterest
Finnish state news YLE has its PC filters in place, with the rioters being described as just “youths”. Thanks to Finnish blogger Kumitonttu, who alerted the Tundra Tabloids this morning about the latest in buffoonery over at YLE. 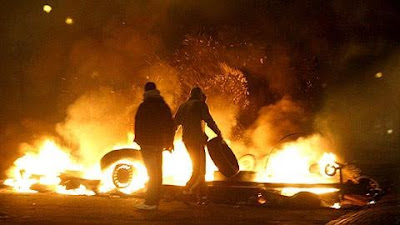 According to both YLE’s internet and morning news broadcasts:

Nightly rioting in Malmo, southern Sweden calmed down a little early Friday. Government reports indicate that no one has been hurt in the recent confrontations. A group of youths rioted and did vandalism in Malmo for the second night in a row. About a hundred young people threw stones at cars and buses, and started small fires in the Rosengard area.The police spokeswoman Ewa-Gun Westford Rosengard described the situation at four in the morning as a battlefield, but said that the police had reached the scene. During the night there were a hundred policemen at the scene, but they couldn’t get the situation under control. As a result, among other things, rescue workers left small fires burning during the night.Youths also threw stones at policemen. Last night police arrested about 20 youths which were involved in vandalism. The riots began when police emptied the so called ‘mosque basement’ youths had taken over. The mosque was closed last month, but a group of youths had occupied space on several occasions. The leasing company closed the building because according to the company, it wasn’t being used for the purpose notified by the tenant.

Only towards the end of the article does one find out that the rioting is over a mosque, but then left in the dark as to who these youths were. Was it Muslim youths doing the rioting and vandalism, or skin heads? That’s the problem with political correctness, it clouds peoples’ minds, robbing them of their good common sense and judgement.
In what should have been a straight forward news article about Muslim youths rioting because they were evicted from a premises that was wrongly being used as a Mosque, leaves the identity of those doing the damage and rioting unknown. To the casual reader, they’re just … youths. KGS