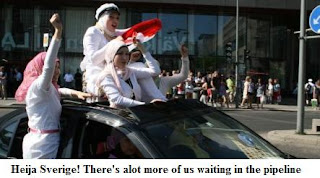 Sweden’s foreign-born population is expected to reach 14 percent by the end of 2008, a year in which the country’s overall population had its greatest increase since 1970.

In the last decade, the Sweden’s foreign-born population has grown by 27 percent, as measured as a percentage of Sweden’s total population, according to Statistics Sweden. If people born in Sweden to two foreign-born parents are added to the mix, the total comes to 378,000 people, or nearly 20 percent of Sweden’s overall population.

The 108,000 Iraqis now living in Sweden comprise the second largest group of foreign-born residents in the country behind natives of Finland, of which there are 176,000. During the past year, 102,000 people immigrated to Sweden, a 2 percent increase from 2007. Immigration from Iraq was down 21 percent from the year 2007, but still remained strong with an estimated 12,000 Iraqis entering Sweden in 2008.