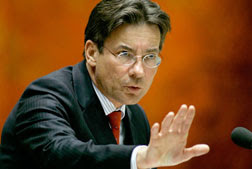 “FM Verhagen won’t attend ‘propaganda circus’..It seems like the sole intention is to criticize Israel and condemn the West for slavery and its colonial history,”

The Tundra Tabloids of course applauds the Dutch FM’s statements, the Geneva conference slated to take place next year in Switzerland, aptly dubbed “Durban II” for a reason, will be most certainly used as a platform by the Islamic led block at the UN, to exclusively criticize Israel and the West.

Holland’s foreign minister Maxime Verhagen told Dutch radio yesterday he “will not be involved in anti-Semitism” by attending “a propaganda circus.” “It seems like the sole intention is to criticize Israel and condemn the West for slavery and its colonial history,” Verhagen said.

Ottowa and Jerusalem have already decided to withdraw their official participation. The United States has protested the conference, but incoming president Barack Obama has not indicated yet if he will send a delegation.

At the initial racism conference in Durban, South Africa in 2001, Israel and the United States walked out midway because of a draft resolution equating Zionism with racism. Verhagen fears a repeat performance in Geneva, and said the Dutch will withdraw unless the proposed resolutions are changed.

Some Jewish and human rights organizations have suggested holding an alternative conference at the same time to provide a more balanced platform at which to address the issues of racism and xenophobia.

The Tundra Tabloids has already proved that the OIC will most certainly be using that forum to scape goat Israel, the head of that organization, Sec-Gen Ekmeleddin Ihsanoglu is only interested in pushing the bogus issue of “Islamophobia”, and not interested in the every day phenomenon of Islamic anti-Semitism, of which the Sec-Gen “does not believe that any Muslim good or bad could be guilty of.”

Some words of advice for the Dutch FM.

If you think that Islam is going to subvert a conference on human rights and racism, what makes you think that these same Muslim groups haven’t been trying to do that already at the UN and on the EU level? You would be wise to apply the same sound logic and reasoning you are applying to the upcoming Durban II conference, and begin to look anew at how both the UN and European Union institutions are being subverted in much the same way. KGS