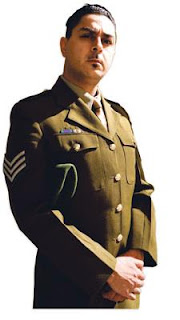 This is an immigrant that really gets it. Arman Alizad, like other greatfull immigrants who have migrated to the West, seek to become a part of the societies that have accepted them, by accepting their values and honoring their traditions, not demanding the host society to change its lifestyles to suit the one they left behind.
Here is an op-ed written by Arman Alizad that appeared in the Finnish paper City. I would like to see the multiculturalists try and paint this guy as a racist and white supremacist. KGS
Arman Alizad: People adapt to anything. A war veteran to a metal plate in his head, and the first Finns to a winter’s frost in 8000 B.C. It is about attitude. My family has lived in Finland since the 60’s and to us, Finns are the planet’s most friendliest and reliable nation, not racists. From the very beginning, we became adjusted to the new country’s climate, people and laws. When in Rome.

Asylum-seekers are immigrating to Finland from countries where culture and religion are opposites to Nordic ways. Without adjustment, balance can never be achieved. Finland provides accommodation, for those who would die in their own country. You would think that this a sufficient reason for compromise when moving to a second home.

Much of the Islamic states’ populations are poor and uneducated. The unschooled do not always see God as an abstract creature. The Koran is thus, a word for word law. Koranic laws are very old, but the fact that an immigrants wife should be punished violently so that she can live in purity, does not belong in any millennium. And, incidentally, in Finland we have this thing called ‘reilu meininki’ (fair play).
Finland alters its swimming halls hours to make it suitable for Muslims, changes Christmas festivities to porridge celebrations and allows for Muslim men to keep their wives continually pregnant, so that the women are unable to study or engage in work. Having a child is the right of all, but if it brings the individual in conflict with the society’s well-being, that too needs a limit placed upon it. What does Finland receive in return? A Finn moving to Iran shouldn’t change Islamic prayer times and habits but invoking his religion. What would await him would be either stoning or deportation. In extreme cases, both.
Finland is home to thousands of hardworking and law-abiding foreigners who are adapting to the service industry a hundred times better than the Finns. It is wrong, for their reputation to be stained because of those who exploit Finnish generosity.
Finland should make an agreement with asylum seekers, which would oblige them to pass in three years time an oral language exam, and obtain at least a part-time job. As a result, they would be paying back to society, which saved them from death. It will also include a temporary clause concerning child bearing. The agreement of course, would take into account heavily traumatized immigrants. Those who are in breach of contract, will be deported from Finland.
That is what I call ‘reilu meininki’.