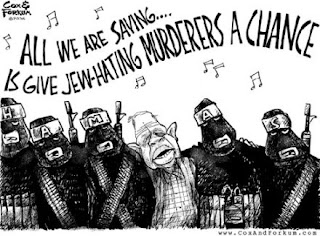 In his latest article, Barry Rubin hits the nail squarely on the head concerning Western leaders hearing only what they want to hear.

There is a dearth of information that proves beyond a shadow of a doubt, that supposed “moderate Arabs” actually loathe the very same Westerners who continually dole out the cash that fund their various thuggish enterprises, in the vain hope it will somehow moderate their positions vis-a-vis Israel and the West.

It’s however a mugs game, with the funds being spent to prop up their own corrupt regimes at the expense of the people they claim to represent. It does not bring these gangsters (for that’s what they are) any closer to going legit, than it did for Al Capone in gangster land Chicago in the 20’s and 30′, and as far as I can tell, the city of Chicago is still saddled with that legacy.
Not only are gangsters being rewarded for being the toughest ‘gangsta’ group in town, they use that wealth -taken from good, honest tax paying people elsewhere- to increase their hegemony and to wage a terrorist war against a fellow representational government, Israel. The problem lies though, with the leaders of Western states who believe that they are in fact doing some good, when in reality they just prolong the misery of all involved in the conflict.
Palestinians must always adhere to the party line in order to qualify for the largess being handed out, therefore keeping true reformers outside the political system, as well as making government an attractive means to enrich oneself for all future aspiring apparatchiks.
As Dr.Daniel Pipes has mentioned repeatedly, there should be no talk of future “aid” for the Palestinians until they change their ways. Period. And he’s right, because the money received never pays out in future dividends for peace, instead we see a rise in terrorist attacks that’s in part funded directly and indirectly from Western aid. It’s high time our Western leaders begin to listen very closely to what the Arab leaders are saying amongst themselves, in Arabic, and take them at their word. KGS
Barry Rubin:
What They Say Isn’t What You Hear