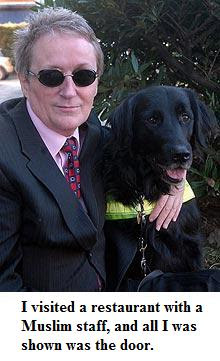 It’s called the religion of peace but, try and tell that to the blind guy in the picture, who tried to get a seat in a restuarant that had a Muslim staff. They were offended by his seeing-eye dog. The dog happens to do more for mankind than the ideology that was represented at that restuarant. KGS

Telegraph: A blind man has been turned away from a fashionable Indian restaurant because his guide dog offended Muslim staff. Alun Elder-Brown, a recruitment executive, said he was left feeling “like a piece of dirt” after being barred from bringing the animal into Kirthon Restaurant in Tunbridge Wells, Kent, on religious grounds.

The Guide Dogs for the Blind Association said the decision was illegal under the Disability Discrimination Act and Mr Elder-Brown, 51, is now considering suing the establishment in The Pantiles. It follows a series of successful prosecutions of Muslim taxi drivers who refused to carry guide dogs in their cars because they considered them unclean on religious grounds.
Mr Elder-Brown was taking his girlfriend out to celebrate her birthday with her five year-old daughter last week when he was told he would have to leave his dog, Finn, tied up outside. He showed a card issued by the Institute of Environmental Health Officers certifying he and his dog were allowed into any premises but an argument ensued and the owners threatened to call the police if he did not leave.
“It was humiliating and degrading, especially as there were a lot of people around me,” he said.
“I was made to feel like a piece of dirt. They told me I couldn’t come in because it was against their religious beliefs to have a dog in the restaurant.
“They then said I could leave Finn tied up outside. I stayed calm but when they threatened to call police I left.” He added: “It was horrible. It put a dampener on the whole celebration.”…
NOTE: And all we here from the followers of Mo, is how offended they are.
Thanks to the Sheik