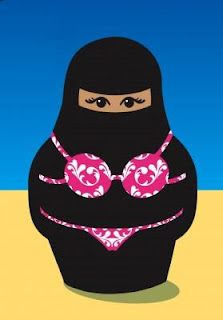 The height of stupidity. I remind you that the story takes place in one of the most liberal of Scandinavian states, Sweden.
Though the decision to allow for the renting of these ridiculous swim suits may appear to most as showing signs of tolerance towards a minority, in the end, it sanctions unhealthy, misogynist attitudes about female promiscuity.
Western tolerance of females binding themselves up from head to ankle sends not only a message of societal acceptance for intolerant parochial misogynist views, it is also tacit approval of the notion that all males are “sexual predators” without any form of self control. Males are by default, reduced to being animals.
It also reinforces the brainwashing these unfortunate females have gone through since birth, in which any straying from the herd thinking about promiscuity, will invite dishonor and shame to themselves but most importantly to their families. What happens when females are forced by their families to don these oppressive garments on for swimming, because from now on, their menfolk can point to the state’s approval of the garments to validate their own misogynist thinking?
The Local: In a nod to women not wishing to reveal too much, an indoor public swimming pool in Sweden has begun renting out burkinis, full-body swimsuits that cover everything but the face, hands, and feet. For 30 kronor ($3.75), the Stadsparksbadet pool in Borås in western Sweden now offers bathers who would rather not bathe in traditional swimwear something more comfortable that allows them to utilize the co-ed public pool
“[Previously] there hasn’t been a well-functioning alternative,” said pool head Anette Ekberg to the Borås Tidning (BT) newspaper, explaining that bathers who in the past chose not to wear regular swimsuits had to come up with more creative – but often less practical solutions.“Some would swim in long pants and a shirt. Not the best solution but we don’t want to prohibit something because we can’t provide an alternative.”
Stupid is as stupid does. Though the sight of a burka swim suit is offensive, there shouldn’t be any call for its banning, the lack of official societal approval would suffice. Too bad about the decision by the swimming hall in Borås, for they just took Sweden one step closer to officially sanctioning the same anti-female sentiments that are in abundance throughout the Islamic world. KGS