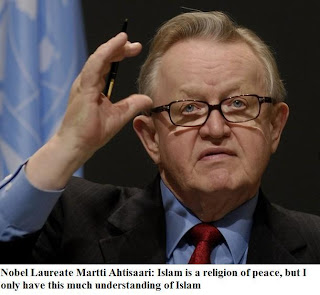 The Tundra Tabloids is forced to return to the subject of Finnish Nobel Laureate Martti Ahtisaari, and his comments about peace making in the Middle East.

Like the TT said earlier: Martti Ahtisaari is a good guy. But Ahtisaari’s being a nice guy, and a friend of Israel, doesn’t excuse him from being criticized for making incredibily naive statmements about peace making, especially when it involves the religion of the madman from the Arabian desert.

Uusi-Suomi: Ahtisaari said that he believed that for president-elect Barack Obama, the Middle East will be a high priority during the first year of his presidency.

Ahtisaari also said that resolving the crisis must take into account the entire Middle East region. Ahtisaari believed that religion can be of help in the peace talks. Ahtisaari has said that all religions are peace-loving.”

Jihad Watch: Arab Clerics to Palestinians: “Let pure bodies blow up again in Jerusalem and Tel Aviv, and in all the cities of occupied Palestine”

“Let pure bodies blow up again in Jerusalem and Tel Aviv, and in all the cities of occupied Palestine, because this enemy understands nothing but the language of force.” Projection Alert!

Genocide dreams from Islamic scholars: “Arab Islamist Clerics to Palestinians: Slaughter the Jews Like You Did in 1929; Blow Yourselves Up in Jerusalem and Tel Aviv,” from MEMRITV, December 3-5 (thanks to Pamela):

Following are excerpts from speeches by Arab Islamic leaders expressing solidarity with Gaza, which aired on Al-Manar and Al-Aqsa TV, December 3 and 5, 2008.

Sheik Himam Sa’id, Supreme Guide of the Muslim Brotherhood in Jordan: Oh noble Gaza, raise your head high. You have made the Muslims raise their heads high. And you, people of Hebron – you are now waging a war against the Jews. You are well-versed in this. We saw how, on a day in 1929, you slaughtered the Jews in Hebron. Today, slaughter them on the land of Hebron. Kill them in Palestine. Arise, oh people of Palestine, all the people of Palestine – arise in defense of your Al-Aqsa Mosque, arise in defense of Nablus and Hebron. Arise and face the [PA] Preventive Security forces. Fear them not, for they are rabbits. They are wolves, so fear them not, oh lions.

The Muslim Brotherhood, please recall, is engaged in the United States in what it has called “a kind of grand Jihad in eliminating and destroying the Western civilization from within.”Oh young men, what will you say to the Jordanian government? Expel the Jewish ambassador from Amman. Amman is pure, and the Jewish ambassador must not defile its soil. Recall the Jordanian ambassador from Palestine. Only mujahideen should be in Palestine – not ambassadors, not ministers, or any representative of this nation. Do not recognize the ambassador of this nation in Palestine. Palestine is the land of Jihad, of sacrifice, and of preparation. We say to this government: Stop normalization with the Jews. Stop all imports and exports with the Jews. Our markets are full of Jewish vegetables and Jewish fruits. Traders who bring these fruits and vegetables are traitors, collaborators. Tell them this. Make them hear our voice. The position of the religious scholars is that anyone who trades with the Jews is a traitor and collaborator.

Palestine is the land of Jihad? The land of inner spiritual struggle? Then how is it that Sheik Himam Sa’id seems so preoccupied with killing and slaughter? And how is it that the “religious scholars” he invokes haven’t disabused him of his erroneous, “Islamophobic” notions of jihad as having something to do with violence?

Husan Abdallah, Lebanese Association of Islamic Scholars: I say on behalf of the Association of Islamic Scholars: The truce with the Zionist entity is meaningless. The solution is to renew the resistance in a stronger and more effective way. Let pure bodies blow up again in Jerusalem and Tel Aviv, and in all the cities of occupied Palestine, because this enemy understands nothing but the language of force. […]

Husan Abdallah is affiliated with what group? The Lebanese Association of Islamic Scholars? How is it that he missed all the peaceful teachings of Islam?

Osama Hamdan, Hamas Representative in Lebanon: Our goal is to liberate all of Palestine, from the river to the sea, from Rosh Hanikra to Umm Al-Rashrash [Eilat]. From Gaza, gentlemen… We do not want a state 364 square kilometers in size, nor do we want a state which we had to beg for at the negotiating table. Such a state will never come to be. What we want is a free state, which maintains its dignity, 27,000 square kilometers in size – the size of Palestine in its entirety.

Then Hugh Fitzgerald weighs in: “The war against Israel waged by Muslim Arabs and other Muslims who follow the Arab lead is merely a classic Jihad. After the Six-Day War, the Arabs made every effort, because they realized that a military “solution” was not at hand, and they would need the outside world, and particularly the Western powers that had affinities with, even gave support to, Israel, to take their side and, little by little, to see the conflict not as what it was, but as something else, in which tiny Israel could be depicted as the o’erweening bully, and the Arab side depicted as the much weaker victims.
Considering that the Arabs alone outnumber the Jews of Israel 60 to one, and that the land in the possession of the Arabs is about 14 million square miles, while Israel in the 1949 armistice lines is about 10,000 square miles, and even with the “West Bank” does not even contain the 14,000 square miles that would make Mighty Israel, Greater Israel, all of one-one-thousandth the size of the Arab-ruled lands (where Berbers, Kurds, Copts, and all other non-Arab or non-Muslim peoples, are treated with contumely, or discrimination, or persecution, or worse), this was a neat trick.” More here from Hugh.
The idea that one can just sit down with the Arabs and work out a deal that will be suitable for all, -which will demand a great deal of giving and taking from both sides- as well as counting on Islamic leaders for help in bringing this to fruition, is pure nonsense.
As the Tundra Tabloids has pointed out in the past, the conflict between Israel and the Arabs can no longer be defined as a fight for land, but a fight against Jews by the Palestinians for the greater good of the Islamic Ummah. This is war of jihad against the perceived enemies of Islam. Perhaps it has always been that from the very beginning, but the West has been loathe to admit as much. Once again, Tundraman succinctly calls things as they are, not what well intended people (goodists) hope for them to be. KGS
Tundraman: The fact that a Nobel peace-price winner has nothing more sophisticated to say about the ME than that “all religions are peace loving”, that one could therefore even “capitalize on religion” in the peace-making in the ME, and that “the ME countries should start developing their economy together and use their strategic position between continents” really sounds incredibly naïve, even to the point of being stupid. It is quite comparable to a Sunday sermon in church suggesting that “they should all start loving each other” – don’t you think?

Via: Winds of Jihad