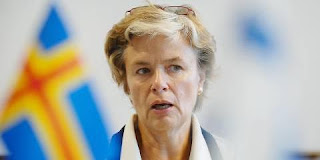 What is the woman thinking? Minster of Immigration and Europe, Astrid Thors has submitted a bill to the Finnish parliament for review and approval, that would greatly relax the tough restrictions in place concerning how the state deals with immigrants who are denied permission to settle in Finland.
Funny, Thors would never suggest such a bill to the autonomous parliament of the flag seen in the picture behind the Swedish Finnish minister. The good people of Åland, (Ahvenamaa in Finnish) would plant a boot on her backside and out the door she would fly.
According to Helsinki Councilman, Jussi Halla-aho, “The bill will possibly be voted on before the Christmas holidays, and most Finns have not even heard anything about the matter, (including the TT until yesterday) because the media, except for the Aamulehti paper, had not seen the benefit in reporting about it.” According to Halla-aho, “despite Astrid Thors’ claims that the bill focuses specifically on ‘occupational migration promotion’, this is not the case, the proposed changes in the law will be exclusively affecting humanitarian immigration.”

If the bill passes in the Finnish parliament, what’s in store for the future of immigration policies in Finland can be seen by simply reviewing Sweden’s own immigration policies. It will be even that much more difficult for Finnish officials to repatriate individuals back to where they came from, once they fail to meet all the strict requirements for seeking asylum.

Halla-aho: “The new law will allow for a permanent residence permit to be issued on the basis that persons receiving a rejected asylum application, for technical reasons, can not be returned to their home country. The “technical” reasons, for example, are bad or missing transportion connections, travel documents or in the absence of a country’s willingness to take them back.

It’s relatively easy to see where such a policy would lead. Transportation connections to main countries origin for standard of living migration (like Somalia) seem to be lacking only in the case of deportation decisions. They seem to functioning quite well when it comes to asylum-seekers to Finland or other European Union countries arriving from the old country. Equally well, they seem to be working when the asylum-seeker’s relatives are brought to Finland within the family reunification framework.

The deliberate destruction of travel documents to hamper investigations of asylum seekers has been a routine operation up until now. The new law will reward those detroying their passports with a standing residence permit.

It is clear that countries of origin are reluctant to take back their citizens, who are standard of living migrants, religious agitators, or criminals. The new law gives these countries a better opportunity to dump surplus or otherwise unwanted populations to Finland and the through Finland to the whole of the EU.

The pearl in Thors’ bill is the fact that those who have committed crimes and are to be expelled, should also have the right for family reunification in Finland. Is it intended to fly the family of the expelled to Finland, and then send it to accompany the expellee back? Or is it designed to create a situation in which the expulsion decision will be forced to be repealed due to “humanitarian reasons”?

One begins to see the collusion that exists between the majority of the Finnish media, with political elites that are driving the same failed immigration policies noticeable elsewhere.
No rational minded person is against a person of foreign background (who agrees with a western liberal society) seeking a work place that already exists in the job market, but what rational minded person would want a situation in which persons who do not have jobs waiting for them, do not qualify as aslyum seekers, who are either criminals and/or basically unemployable, soaking up public benefits, as well as with their families flown in for reunification, and at the tax payers expence?
Well, there is a petition available online that is drawing signatures of those who dissaprove of the bill, which will be presented to a public official in the Finnish parliament. Anyone Finn reading this, please pass it along to others for review and signing. KGS
UPDATE: Aamulehti:
Coalition Youth League (Kokoomus) calls for Immigration Minister Astrid Thors (SFP) to resign.
Youth Coalition chairman, Teppo Leinonen, says that the Minister of Justice Astrid Thors’ understanding of the law differs so crucially from that of ordinary Finns, that she no longer had the pre-requisite to continue as a minister.
– Thors needs to be aware of this and resign.
The Coalition Youth League believes that Thors’ new immigration law proposal is full of huge loopholes. The Coalition Youth League believes that Thor is proceeding with blinders on. Throughout the rest of Europe the determining fact is, that overly liberal immigration policy poses significant social and cultural problems. When the rest are moving towards a more responsible immigration policy, Thors would like take Finland in the opposite direction.
KUDOS!!!!!!!! KGS
H/T Harri.
UPDATE: Slapdown for Auntie Thors. Parliament rejects bill that weakens immigration laws. Thors to go back on Friday with a new revision of the old bill.