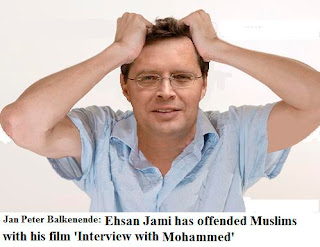 Whining Western dhimmi politician alert. The film was a stroke of genius, and Ehsan Jami should be getting applause for his attempt at trying to get the Islamic world to seriously confront their dangerous and severely outdated religious edicts and dogma. Henrik Clausen stated it the best to the TT:

While watching it, I was waiting for killer points for Islam to come out, and they came, one by one, well documented, and impossible to refute. Ehsan knowingly went for the hadith, he co-opted several lame Islamic excuses for their mock religion into the work, and he puts ol’ Mo precisely in the role of a reformed criminal, the most embarrassing position he can take for Islam – not least the fundamentalist strain. This is mockery at its finest.

I find the Dutch Premier to be an outright fool. Here is the video once again! KGS

THE HAGUE, 11/12/08 – Ehsan Jami has offended Muslims with his film ‘Interview with Mohammed’, according to an official statement released yesterday by Premier Jan Peter Balkenende on behalf of the Dutch government.

We also have a tradition of respect, tolerance and responsibility. Offending other people is not in keeping with these traditions. Conversely, free and unrestricted debate and respectful treatment do reflect these traditions. In this light, the government regrets the fact that Mr Jami’s film deeply offends the feelings of many Muslims.”

“The government emphatically rejects the way that some have misused religion to spread hate and intolerance. Respect for the deeply held convictions of others is something that we share with people in many countries. The Netherlands will continue striving to ensure that freedom of religion and belief and freedom of expression are respected both in this country and worldwide.”