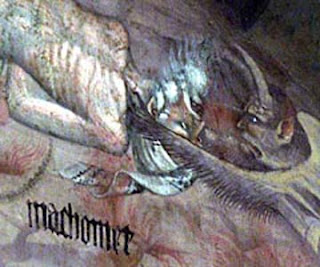 Henrik Ræder Clausen recently sent the Tundra Tabloids a piece about terrorists in “To Hell with Allah“, that in the TT’s opinion, cleverly reflects a time period in Christian church history in which religious leaders held altogether different views vis-a-vis the Islamic world, than they dare admit to now.
In today’s world, any church leader daring to speak publically of his or her opinions about the religion of Mohamed, will have not only the Muslim world demanding his or her head, but will also be inundated with demands for apologies from within familiar Christian circles as well.
Though the piece appears to be all inclusive as to who falls from grace and out of heaven’s favor, in the TT’s opinion it’s really a selective shot at those who are doing the most damage in the world today, the followers of the madman from the Arabian desert. Read and decide for yourselves. KGS

To Hell with Allah: A Terrorist’s AfterlifeHenrik Ræder Clausen: I’m pondering what these prospective ‘martyrs’ will experience when they wake up in the afterlife.

Possibly intense heat, flames and explosions all around them, molten lead being pourn down their throats and their skin being ripped off repeatedly just for the sake of pain. Forced injections with sense-stimulating drugs, probably too. Then, looking around, they identify Allah – sitting on a thrown of glowing iron, enjoying the fate of those around.

Then, in a pause from the torment, they get up and ask, for they thought the book had promised them a somewhat, ehm, different fate. Allah replies: “No way, this is the fate of those who fall for deception to commit hineous acts of violence. You’ve come to the right place. Better get used to it, you’ll be here for a while.”

The somewhat disspirited non-martyrs then mount their last defense: “Sure, this looks quite vividly like the Quran describes Hell, including you being here to stoke the fires with the bodies of the infidels. But we’re not infidels, we’re Muslims. This cannot be!”

Putting up an evil grin, Allah continues: “The Quran, the book given by Muhammad? He did a few editing mistakes in that book. Hell is the place for people with no faith in Christ the Saviour and who thus fall from grace into barbary. Sorry, he created a mock religion with bad results. If you want to avoid this, you need to stay clear of deception and avoid committing acts of evil.”