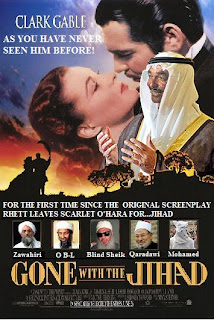 Don Feder lays it all out concerning the media’s dropping of the ball with its refusal to link Islam with the latest outrage in Mumbai. Feder writes that: “Mumbai is the latest chapter in the millennial bestseller, Gone With The Jihad.”

It’s the truth, and there’s no denying it, anybody who talks of “Islam having been hijacked by extremists yada yada yada, bla bla bla, it’s really a religion of peace”, clearly lacks historical knowledge of Islam and of its brutal imperialism. KGS

Don Feder: In its coverage of a series of coordinated attacks in Mumbai last week that left 172 dead, the New York Times – America’s newspaper that sounds like a broken record – scrupulously avoided any suggestion of possible sectarian motivation for the atrocities. The perpetrators were variously referred to as “terrorists,” “gunmen,” “militants” and “assailants.”

The only time “Islam,” “Muslims” or similar expressions were used was in reporting on statements of the terrorists themselves – as when they railed against the alleged mistreatment of Muslims in Kashmir and India or demanded that “mujahedeen” prisoners be released. Sky News reported that the terrorists called on the Indian government “to return stolen Muslim lands” – which, in the wide world of Islam, is all of India.

[…]
The Chabad House was targeted because it was Mumbai’s center of Jewish activity. Muslims like killing Jews almost as much as they enjoy killing Hindus. Their religion commands it. A doctor who performed post-mortems on the Jewish victims said they were tortured before they were killed and “bore the maximum torture marks” of all who died in Mumbai (as quoted on the Indian news website Rediff.com).

There must’ve been a whole lot of shaking going on in 8th century India, when the Muslim subjugation of the subcontinent began. Millions were murdered. In the city of Somnath alone, more than 50,000 were slaughtered.

The slave markets of the Middle East were glutted with Hindu women and children taken captive. An ancient civilization was nearly destroyed. (Libraries were leveled and manuscripts burned.)

In his book The Sword of the Prophet: Islam History, Theology, Impact on The World, Serge Trifkovic offers the following account: “Muslim invaders began entering India in the early eighth century, on the orders of Hajjaj, the governor of Iraq. Starting in 712, the raiders, commanded by Muhammad Qasim, demolished temples, shattered sculptures, plundered palaces, killed vast numbers of men – it took them three days to slaughter the inhabitants of the port city of Debal – and carried off their women and children to slavery.”

Strange how the plunderers of palaces and killers of vast numbers usually have names like Muhammad or Osama instead of Seymour or Sanjay.

In his multi-volume work, The Story of Civilization, Will Durant singled this out as among the bloodiest episodes in history. Durant characterized it as “a discouraging tale, for it’s evident that civilization is a precious good, whose delicate complex order and freedom can at any moment be overthrown by barbarians invading from without and multiplying from within.…”