During a more sane time when the Tundra Tabloids was a 2nd class signalman on board the USS Dewey DDG-45 (The Cocked 45) off the coast of Venezuela in 1979. 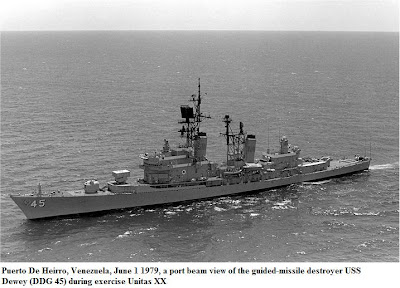 Now it’s pieces of Russian floating crap like the one below that will be plying the ocean with the Chavez’s toy boats. 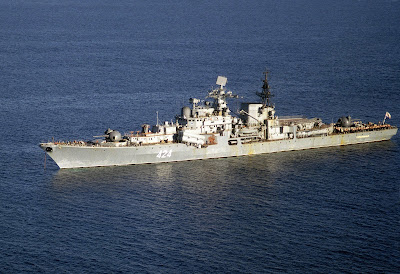 As much as this is a thorn in the US’s side, both navies are joke, at least for now. KGS

VOA: Russia and Venezuela have begun a series of joint naval operations in the southern Caribbean Sea aimed at evaluating their nations’ skills in the fight against terrorism and drug trafficking. Military officials for both countries said the exercises, dubbed “VenRus 2008,” will include navigation, rescue and other operations.
A fleet of about 1,600 Russian naval officers is participating in the exercise aboard several Russian warships, which left the port of La Guaira, near Caracas, Monday for the exercises. The vessels arrived in Venezuela late last month in Russia’s first deployment in the Caribbean since the Cold War.
The U.S. State Department has said the United States will keep a close eye on the military exercises, but it has dismissed the notion that they represent a challenge to U.S. influence in the region.
Via: Atlas