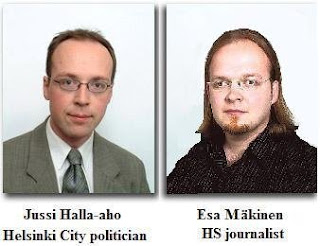 Jussi Halla-Aho: Esa Mäkinen is a former journalist for Kansan Uutiset (TT: Finland’s largest Leftist paper) and former EIC of a university paper. […] Many of the HS’s readers will remember how Mäkinen in January of this year trotted Councilwoman Zahra Abdullan (TT: Somali refugee who makes repeated visits Somalia) to the National Museum and tried (unsuccessfully) to get her to mock the Finnish people’s embarrassing history. Taking into account Mäkinen’s background, today’s article is, as I said, mostly businesslike. The next point is a good example of how to create an image in the mind of person using subtle techniques: Helsingin Sanomat journalist Esa Mäkinen: “Fewer and fewer online racists are talking about lazy negroes that are taking honest work from the Finns. Immigration critics have learned to speak of the problems of culture, religion and societal clashes.Jussi Halla-aho: Mäkinen would like to say that concern for problems of culture, religion and societal clashes is a smoke screen for the loathing of lazy, work stealing negroes. Mäkinen does not take into account the possibility that someone, which is not at all interested in lazy, work stealing negroes, may be genuinely concerned about problems of culture, religion and societal clashes. Should this be interpreted a) that these problems do not exist (and therefore can not be really worried about), or b) that they can’t be of genuine concern (although they they exist)? We have such a surreal situation that the problems of immigration, are yes, widely admitted to, but at the same time denying the possibility that speaking of the problems could be done in good faith. Esa Mäkinen: His basic allegation is that immigration is a threat to Europe,” The sinking of the West. “Everyone that comes here according to Halla-aho does not respect freedom and the ideals of equality .”Halla-aho: Really? Does Mäkinen believe that all of those coming to Europe respect freedom and the ideals of equality?Esa Mäkinen: He paints images of marginalized ghettos, rising crime and unemployment in the West’s economy weighed down by refugees.” Halla-aho: Paints images? Are marginalized ghettos, increased crime and the economy weighed down by refugees a product of the imagination? Esa Mäkinen: “Political populism is the traditional hallmark of the opposition instead of constructive proposals. Concrete proposals Halla-aholla has, albeit very little.” Halla-aho: After all, I have a lot of concrete proposals. For an example, Danish-style reform, which includes the cessation of family reunification, repatriation of unjustified asylum-seekers, the end of such categories as “a residence permit for humanitarian reasons,” shutting down of the social benefits for humanitarian immigrants and marriages of convenience. I presented these to Mäkinen, the fact that he did not want to publish them, is not evidence that they weren’t said. He did not want to publish them because he wanted to say that I do not have concrete proposals.Esa Mäkinen: In addition, he also proposed that the status of Swedish as a second language for the nation should be abolished. It should be compared with Saame.”Halla-aho: I did not quite say it like that. I said that the Swedish language should be granted the language of a normal minority status, the same principles as the Sami language. The rationale was that the current system only creates negative attitudes towards the Swedish language, and it does not achieve, on the other hand, any good (such as the extensive knowledge pf the Swedish language ). Esa Mäkinen: Halla-aho confuses in his texts foreigners, immigrants, Islamists and Somalis. For example, he first talk about crimes of immigrants in a general way and then give as examples of suggestive journal stories of black men.” Halla-aho: Not one example does Mäkinen give of such a practice, and the reason seems obvious: I have explicitly criticized supporters of uncontrolled immigration of deliberately mixing policy concepts, that base their reasoning for Somali refugee immigration because someone like Finlayson or Fazer, have moved to Finland and benefited the country. (Names of very successful foreigners in Finland)Esa Mäkinen: “Halla-aho, for example, argues that the Somalis would make for 12 percent of the looting. In reality, multi-year average is 4 percent. “I would have been able to verify this. Yet, four percent of 0.2 percent of the population is quite an over-representation,” he answered. ” Halla-aho: Mäkinen gives the impression that I pulled the “12 percent” from my sleeve . What is in question is the Turun Sanomat’s (TT:Newspaper) publication of the figures from a police report. It describes a one-year statistical peak, but I have not claimed otherwise either. My figure is not inaccurate, it just describes other matters than the multi-year average of 4%. Otherwise, Mäkinen’s argument reminds me of the reaction a few years ago, to the Black Book of Communism. Communists at the time, sought to prove their outrage by arguing that the victims of Communism were not a hundred million dead, but no more than 60 or 50 or 40 million people. It’s as if the latter figures would be somehow more bearable. Sure thing, Somalis do year after year, only 4% of the robberies the police know of. Then according to demographics, they do “only” 20 times more robberies than that which is represented by the host population. I had received a proof of the article and told Mäkinen that he cites me poorly, dishonestly and tendentiously. This had no impact on the article, since Mäkinen’s agenda is, that I use self-invented figures.