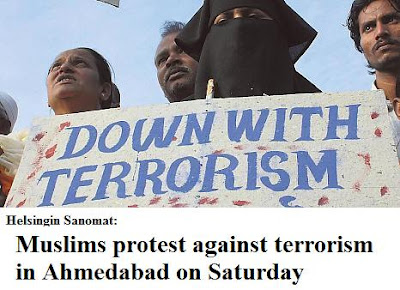 Yeah right, just when will the folks in the picture demonstrate againt Koranic verses that lead to the terrorism they are supposedly against?Andrew Bostom is right, the media will do its best to disconnect the link between Islam and the terrorists who are acting out the violence done in its name. It’s always a case of Muslim “extremists” or “fundamentalists” hijacking the faith of over a billion Muslims, but they just never manage to squeak out a sentence to justify that common understanding.

If Islam is such a benevolent religion, just where are these terrorists getting it all wrong? Where are all the Islamic scholars and sages in pointing just exactly where these violent Muslims have interpreted passages from the Koran and hadiths wrong. What Islamic authority of fame and credibility preaches that Mohamed is not the best example of human character, and not risk being branded a heretic and have a fatwa put on his head?
Andy Bostom knows what’s at stake and realizes the ignorance of the media where Islam is concerned, which explains why the meia is desperate not to stigmatize an entire group of people by placing Islam/Muslim within a sentence containing the word terrorism. But papering over the truth will not place us anywhere nearer to the goal of defeating Islamic terrorism, if the basis for the terrorists’ justification for violence isn’t discussed.
Mohamed, as the founder of Islam, during any point in history, would have best benefited the world had he died before he started his religious/political movement. It’s that simple. After reading Bostom’s latest, you will discover what that is so. Read it in full here. KGS