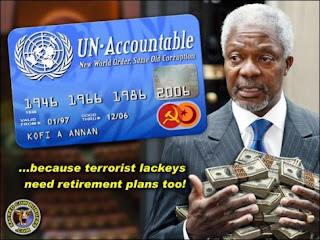 This is the reason why UN sanctions are a, less than satisfactory means, in bringing a rogue state into line with international law. The Swedes and the Russians did the dirty with Saddam Hussein’s regime in a ‘truck laundering’ scheme, in which the Iraqi’s received the vehicles they wanted, and the Swedish truck manufacturer racking up huge sales.

Please remember that, though another UNSC resolution was never needed in the first place, UNSC 1441 already contained enough language to resume war against Iraq if it was proven to have been in breach, it was the Russians, along with the French, that were against any further resolution against Iraq.

The fix was in, and without approval from on high, (read= Vladimir Putin) the Swedes would never have been able to circumvent UN sanctions in such a brazen way.

Scania carried out the sales using a Russian company as a front because, according to an internal memo, the Iraqis had started demanding illegal commissions from everyone who wanted to sell to them.

“It is one way to go around the sanction provisions decided upon by the UN,” said prosecutor Nils-Eric Schultz, who is investigating the company for possible sanctions violations.Initially the company saw the illegal commissions as a reason to stop selling to Iraq, but after nothing was done and its competitors continued to do business in Iraq, Scania decided to look for other solutions.

Did you get that? “its other competitors continued to do business in Iraq”, so it’s not an isolated event….obviously, due to the UN’s Oil For Food scandal, we know that Iraq was well on its way in getting the highly failed UN run sanctions against Iraq rescinded. It’s the main reason why the French and the Russians refused to approve another UN resolution solely designed to wage war (though UNSC 1441 was all that was needed) against Iraq.
This is one of the reasons why the US led Coalition ousted both Saddam and his regime, for the very sanctions set in place to bring Iraq into line with international law, was being subverted by the very members of that world body, even by the members of the UN Security Council, France, Russia and China. The rest is history, but those who love to just trash the US and the UK for a ‘supposed’ unlawful invasion of a sovereign country, will never want to dwell on what took place behind the scenes during that time period. These folks are loathe to talk about the UN’s Oil For Food scandal, and UN Sec-Gen Kofi Annan’s role in it.
Life is made much more simpler by simplistically restating the mantra that ‘George Bush lied and people died’. This latest news story makes that obnoxious mantra an overwhelmingly naive and stupid one, but I won’t kid you, it will be the one that people remember, not the world’s massive circumvention of UN sanctions. KGS