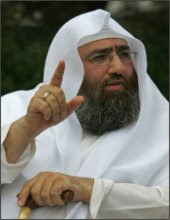 The Tundra Tabloids will give you a clue, it’s not just the ‘fire-brand Muslim radicals’ that usurp hate speech laws, it’s also the seemingly ‘moderate’ Muslims living domestically here in Europe and elsewhere in the West. Hate speech laws are a very controversial, and no matter how noble the idea -of wanting to quash racism and xenophobia against minorities and racial groups- have proven to be very counter productive.

One major reason why hate speech laws are counter productive where Islam is concerned, is due to their being used in stifling any type of criticism directed at Islam, and it’s true reading, which can be used, time and again, to cause a non-Muslim society to be more attuned to Islamic needs, than to the guiding light of Western liberal democracy and pluralism that defends the rights of all its citizens, while holding all accountable under the same rule of law.

Fire-brand Islamic preachers are one major concern, but don’t let it rest there, the Muslims who claim to be ‘moderates’, but yet cringe and cry ‘Islamophobia’ when their Islamic ideology is put under justifiable scrutiny, are as troublesome to our democratic way of life as are the ‘fire-brand’ radicals preaching the truer path to Islam. Hate speech laws need to be put under the microscope once again, and construed to address this reality, or be done away with altogether. KGS

More than 200 Muslims at a packed public meeting in Tower Hamlets were told by organiser Anjem Choudary: “We have a special surprise, a special treat for you. Sheikh Omar Bakri Muhammad will be joining us on a live feed from Lebanon.” He added: “As Muslims, we will not submit to any man-made law, any government, or any prime minister – Bush or Brown – or [to] Jacqui Smith. We submit to Allah.” Choudary, who with Bakri led the fanatical Al-Muhajiroun organisation – notorious for its glorification of terrorism and the 9/11 attacks before its banning and dissolution in 2004 -warmed up the crowd, two Sundays ago, with his own inflammatory rhetoric.”It is our religious obligation to prepare ourselves both physically and mentally and rise up against Muslim oppression and take what is rightfully ours,” he said. “Jihad is a duty and a struggle and an obligation that lies upon the shoulders of us all. We will not rest until the flag of Allah and the flag of Islam is raised above 10 Downing Street.”To loud cheers of “Allah Akbar” [God is great], he railed: “There are three types of Muslims, those in prison, those of us that are on our way [to prison] and non-practising Muslims. Brothers and sisters, if you do not fear your home being raided by the Kufar [non-believer] police, you are not enforcing the Sharia.”Later, in front of a huge banner that exhorted “Muslims rise against British oppression”, he introduced the star turn, 50-year-old Omar Bakri, who was standing by in Lebanon. A giant screen, six-feet high and six-feet wide, had been set up to project the image of the extremist known as “the Tottenham Ayatollah”. He was refused re-entry to the UK in 2005 as “not conducive to the public good” after vowing that Muslims would “give the West a 9/11 day after day after day”. But when a problem with the live internet video feed failed to yield a picture, Mr Choudary phoned his colleague from the stage and put the receiver to the microphone. The connection was loud and clear and Bakri spoke for 15 minutes. Apart from a group of elders with long groomed white beards sitting in the front row, most of the 200 men in attendance were Muslims in their late teens or early 20s, mostly dressed in shalwar kameez with westernised accessories – trainers, hoodies and jackets. At the back of the hall, segregated by partitions, were more than 50 women wearing burkhas. “Do not obey the British law,” Bakri told them. He praised his hero Osama bin Laden for being a warrior and exclaimed: “We must fight and die for Islam – this is the map and road to Jennah [heaven].” He said that Muslims did not need to obey man-made laws and that if anyone ordered them to, they should say they are Muslims “loud and proud”. He branded the new anti-extremist laws “crazy“.