Tsk tsk for not giving the Tundra Tabloids its full due, and come to think of it, Michelle Malkin cribbed the TT’s exclusive post without giving it due accreditation as well. And to think that these Pajama media big wigs think they can take the MAIN STREAM MEDIA to task, but yet fail on the smallest of etiquette.

Over at Jihad Watch, the esteemed Robert Spencer notices the unthinkable as well:

“Whenever I think Charles Johnson can’t possibly stoop any lower, he surprises me. Now he is stealing from those he counts as his enemies, and smearing them in the process: 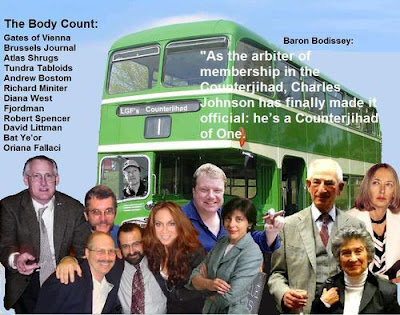 From all of us who dwell in the “Nasty Outer Darkness” to all of you at LGF, Get a life.ALSO: Belcher who has accredited the Tundra Tabloids informs us that: The school superintendent has launched an investigation. Here is what he wrote on (the school website here) about Diantha Harris’ classroom conduct.

“I was shocked when I saw the clip of an interaction between a Cumberland County Schools teacher and her students as posted on YouTube. While neutral discussion of the political process is appropriate, at no time, particularly with elementary students, should a teacher infuse his/her political views into the discussion. Most disconcerting was the military slant that made its way into this discussion. We are a military community, serving over 15,000 military students and their families. We value the sacrifices, not only of the military parents but also those of their families.

I was particularly disturbed to see the uncomfortable position in which our children were placed due to the inappropriate actions of one of our teachers. Please be assured that the actions exhibited in this video are not consistent with the vision of the CCS. Moreover, the actions of one teacher do not represent the 7000 employees in our organization.

Once the video was brought to my attention, I immediately launched an investigation. Personnel laws prevent me from releasing information regarding individual employees and personnel action taken. I can assure you that upon completion of the investigation, I will take appropriate action.

That is exactly the response I was hoping for. Thank you Belchspeak, and to all those who carried the story further, while giving the TT its full due. Kudos.