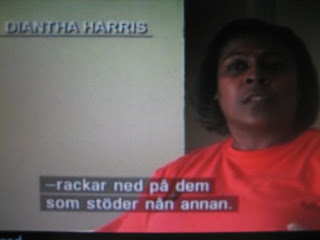 The average American would be outraged to know that a teacher would knowingly and willingly browbeat and belittle a student in class for her choice of a presidential candidate, but that is exactly what happened, in front of a camera no less, in a grade school in Ashville, North Carolina.
But this is no ordinary teacher, she is Diantha Harris, the ex-wife of Roy Harris, the man who asked George Bush Sr. in the Rose Garden of the White House, to visit his family in N.Carolina in 1992.
Bush Sr. obliged and accompanied with his wife Barbara, visited the man’s house and spent time talking with his family. It was a media affair. In a Swedish documentary by Folke Rydén and Bengt Norborg, titled “From Bill to Barack” that aired last night on Finland’s Swedish language channel 5, the two men are shown traveling throughout the US interviewing people who had become news stories themselves during the 92′ presidential elections. 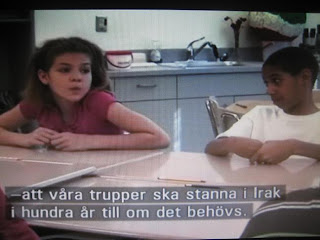 One of the scenes in the documentary however, offers a disturbing look into how a classroom can be manipulated by an ideologically driven teacher who, not only disparages a child for supporting McCain for president, but describes the Iraq war as a “senseless one”, and that her father could be in Iraq for a hundred years due to McCain becoming president.
Your heart is wrenched when you see the face of this little girl, as she sees the students sitting around her, stare at her in silence, with the teacher lording over her all high and mighty. 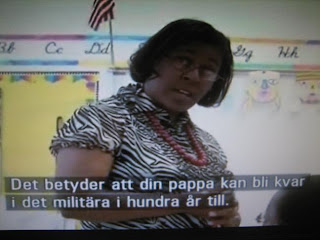 The teacher pretends to allow for diversity of opinion in the class as she asks her students who they support for president, but when a couple of students say they support McCain, she exclaims….”oh Lord” and then “…oh Jesus“.

The Tundra Tabloids was in shock and with mouth wide open during the whole exchange and diatribe, as well as during the teacher’s explanation later on, that “she supports a students right to choose who to support“.

The woman clearly doesn’t as the documentary shows. The portion of interest starts at 13:30 an ends around the 22:00 minute mark. Watch it here. The transcription of the whole exchange is viewable below. Unbelievable. The film clip begins (19:00 min) with the bell ringing and ‘the teacher’ Diantha Haris, standing in the front of the class stating:

UPDATE: Here a video clip of the exchange. The Tundra Tabloids reports, you decide. KGS

We want to talk about the presidential election. Ok, what I want to ask you, who are you pulling for? Raise your hands.(Kids seen dutifully raising their hands one states ‘Obama’)Diantha Harris: You’re pulling for ObamaDiantha Harris: (Speaking to another student) Who you’re pulling for? And if you’re pulling for John McCain, that’s fine say him as well. Who are you pulling for? Student’s answer: Obama.Another student: John McCainDiantha Harris: Oh Lord John McCain!Another student: John McCainDiantha Harris: Oh Jesus, John McCain! Ok, Now I want to ask you something. (to the girl who is ‘pulling’ for McCain) Why are you pulling for John McCain. Now it’s ok! But why are you pulling for John McCain?Student: I think it’s because of my parents are going for him too.Diantha Harris: Ok, your parents are going for him. (Now to another student) Why are you pulling for Barack? (pronounces it differently) Or Barack?Student: Because I just want a black president sometime.Diantha Harris: Ok, you want a black president. Addresses another student.Student: The reason I want to pick Barack Obama is because he is making good changes, in the good country and stuff like that.Diantha Harris: So he’s making good changes for our country. (Shaking her head affirmatively) Ok, now can you tell me just a little bit more like, like what type of changes? Same student: Like, …..not having um, a fight between Iraq, and having soldiers killed.Diantha Harris: Shaking head up and down) So in other words, B-a-r-a-c-k is going to end that war (shaking head up and down) in Iraq. (Speaking to the classroom) What do you all know about that war in Iraq? Now talk to me, because your dad is in the military!(Same female student who supports McCain shown noticeably biting lips) Diantha Harris: Talk!(Female student shown again but doesn’t speak)Diantha Harris: It’s a senseless war! (shown staring at her) And by the way Kathy (the girl’s name), the person that you’re picking for president said, (Harris seen shaking head) that our troops could stay in Iraq for another hundred years if they need to! (emphasis added), (Kathy shown biting lips and looking nervously in silence, while kids stare at her smiling, laughing and smirking)Diantha Harris: So that means that your daddy could stay in the military for another hundred years!During an interview later:Diantha Harris: Now I can support whomever I want to support, as long as I don’t browbeat another person for the candidate that they supported. Like I have some students that support John McCain, and when they told me that, I said ah … “that’s good’ and I just moved on. So, I think that everybody is entitled to their own personal opinion. And we have something in our school system that called ‘Kids Voting’, and in my class….Barack Obama won. (Smiling).
The hubris of this woman, who does exactly what she said shouldn’t be done, browbeat a student because his or her choice is not ‘her choice’ of Brack Obama. It’s obvious that the interviewers brought up the incident of what happened in class, and Diantha Harris knew she was caught dead to rights doing the unthinkable, which was, manipulating her students to think in a certain way.
Harris is an ignoramus of a teacher, and who knows, maybe she actually thinks the poor girl’s father could really spend 100 years in the military. But in the end, Harris chooses to deny her unprofessional actions in class and feign impartiality. But one thing is for certain, there can’t be any doubt why the kids in her class voted overwhelmingly for Obama. KGS