Skip to content
Home
/
2008
/
November
/
2
/
Uncategorized
/
Dance Troupe That Performed at Obama-Khalidi Dinner, Simulated Beheadings in Prior Events…….
Facebook
Twitter
Google+
LinkedIn
Pinterest
Here is an exclusive story by Debbie Schlussel who went undercover in 2004 to “attend a Dearborn (Michigan, USA) fundraising dinner for Islamic Relief, the Muslim Brotherhood charity that is a front for HAMAS and Al-Qaeda.”

According to Schlussel, the group called the Sanabel AlQuds, comprised of kids aged no older than 7 years old, performed a dance called the Debka, a Middle Eastern step-dance, which included the acting out of the beheading/and or shooting of three children draped in the flags of the US, British and Israeli flags. 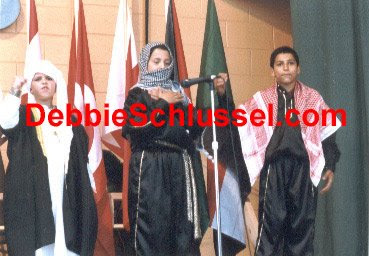 Debbie then realized at the time, why there were signs posted all over the building that no cameras or videos were allowed. This was the very same dance troupe that “showed their stuff” in 2003 at the dinner honoring Rashid Khalidi, that Barack Obama and his wife attended, as well as the unrepentant terrorists Bill Ayers and Bernadine Dohrn.
Debbie has it all here. Schlussel’s undercover work back then, explains now, the reasons why the LA Times is sitting on the video tape of the 2003 Arab American Action Network (AAAN) dinner. Can you imagine the outrage over an Obama participating in dinner event where children are acting out the murder of others, and then stamping on the US, British and Israeli flags?!!! 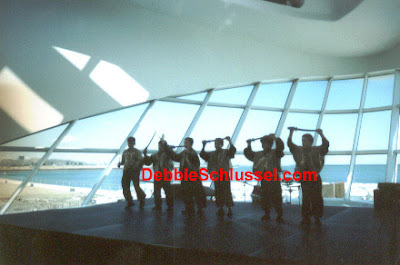 Debbie Schlussel: As you all know, the Los Angeles Times is holding hostage a tape of Barack Obama at a 2003 Arab American Action Network (AAAN) dinner at which his friends, Rashid Khalidi, William Ayers, and Bernadine Dohrn were in attendance. It’s the story I started when Los Angeles Times plagiarist/”reporter” Peter Wallsten ripped off my January column on Barack Obama’s Nation of Islam staffers and friendship with AAAN founder Ali Abunimah.But here’s what you haven’t yet heard: that a kids’ dance troupe that appeared at the event has a history of simulating beheadings and stomping on American, Israeli, and British flags.Reports of the partial guest list at the 2003 dinner include “the Sanabel Debka troupe”, but the group’s name is really “Sanabel AlQuds Dabka troupe.” Sanabel means “grains” or “kernels” (of wheat or barley) in Arabic. AlQuds, or “The Holy”, is the Muslim name for Jerusalem, which is ripped-off from the eternal Hebrew name for Jerusalem, “Ir Kadosh”, or Holy City. The Milwaukee-based Muslim kids dancing troupe purports to perform the debka, a Middle-Eastern step-dance. But this group, made up of mostly Palestinian Muslims and under the auspices of the Milwaukee Muslim American Society does far more in its “performance.” And it’s frightening.
In June 2004, I went undercover and attended a Dearborn fundraising dinner for Islamic Relief, the Muslim Brotherhood charity that is a front for HAMAS and Al-Qaeda. The event was MC’ed by Rayed Tayeh, who orchestrated the Starbucks Coffee boycott and who is believed to be a HAMAS operative.Sanabel AlQuds performed to songs calling for martyrdom to “get back Palestine.” The kids were young boys, some of them appearing to be no older than seven years old.
But they didn’t just dance the debkah.Suddenly the Sanabel AlQuds dancers pulled out fake swords and rifles and adorned three of their troupe respectively with an American, Isreaeli, and British flag. The others pretended to behead and/or shoot the boys wearing the flags. Then they put red scarves over the three boys heads, signifying blood and no head. Then, the flags were taken off, thrown to the ground, and trampled on by this young group of Milwaukee dancers.This was on the Sunday that U.S. contractor Paul Johnson was found beheaded in Saudi Arabia and not long after Nicholas Berg and several other westerners were found beheaded in Iraq. Once I saw this “performance” I realized why there were signs all over saying, “No video equipment or cameras allowed.”

Thankfully we have brave, serious minded people like Debbie Schlussel who do the leg work (read=real investigative journalism) that the lazy and heavily biased media refuses to do. Without people like Schlussel, we wouldn’t be privy to what actually goes on in these Arab/Muslim events, because the media is either out to lunch, or in the tank, with these types. The LA Times, which has publicly backed the Obama presidency has made a political decision in sitting on the tape that would most likely have a very negative impact on the Obama campaign. This whole situation stinks to the high heavens, and shows with out a shadow of a doubt, just how much the media is “in the tank” with the Obama campaign. KGS