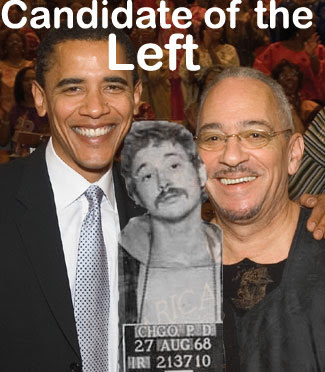 Horowitz to Hitchens: “Some years ago, you wrote a memorable book about Bill Clinton called No One Left To Lie To. When you wrote it, you shared many of Clinton’s political agendas but parted ways with him over his moral corruption. Your defection turned on the issue of presidential character. You were repelled by Clinton’s easy ways with the truth. But Obama’s lies make Clinton’s pale by comparison.

Consider that Obama’s closest counselor and spiritual guide over a twenty year period is a racist kook, a Jew-hating, terrorist-loving acolyte of Farrakhan. When confronted with this fact, Obama responded he had no idea who Jeremiah Wright really was. What Clinton lie comes close to that in brazen coolness? Or this one: My name is Barack Hussein Obama; I grew up the son of a Muslim father and went to a Muslim school in an Islamic state, but I wasn’t raised as a Muslim – I’ve always been a Christian. I do not believe being raised as a Muslim should matter. But I believe the lie should.

For his entire adult life, Obama’s closest political allies have been pro-Soviet progressives like state senator Alice Palmer who chose Obama as the politically appropriate figure whom she chose to inherit her state senate seat; or anti-American radicals like Bill Ayers, who organized a terrorist army in the 1970s with the intention of launching a race war in America, and bringing down the “empire.” Others may be under the illusion that the Weather Underground was organized to protest the Vietnam War. But you know better. Ayers and his comrades were still bombing during the year of America’s bicentennial, 1976, and into the Jimmy Carter administration. They were still in the trenches four years after our withdrawal from Vietnam, because their agenda was a war to destroy the imperial beast, America.

“I was eight years old when Ayers set his bombs.” (More likely 16.) But Ayers’ reputation was legend in the Hyde Park “liberal” community, where Obama met him and embraced him as a political comrade and ally. It was in Ayers’ living room that Obama launched his campaign for Alice Palmer’s left-wing seat. It was Ayers’ father who got Obama his job at the law firm of Sidley Austin, and it was Ayers himself who hired Obama to spend the $50 million Ayers had raised to finance an army of anti-American radicals drawn from ACORN and other nihilistic groups to recruit Chicago school children to their political causes.

When confronted by his association with Ayers, Obama had another characteristic memory lapse. Ayers was just a “guy in the neighborhood” whose children went to school with his. What other crucial facts about his life and what other essential clues to his character has Obama lied about? Or perhaps more appropriately: What has he not lied about? Syrian criminal Tony Reszko, who gave him his house (and received what political favors in return)? If you ask Obama, he never read all those front page stories about Rezsko’s indictments.

And of course, nobody ever bothered to ask Obama why a pro-Soviet trooper like Alice Palmer would want to give her senate seat to him rather than some other worthy. But we can pretty well guess Obama’s answer if they had.

When you peel away the subterfuges and get down to the facts, what you are left with is a life-long radical posing as a political liberal to win the trust of a larger constituency. Schizophrenic disjunctions make up his political character. He is a ruthless machine politician, who chose the Daley mafia over inner city school kids and crushed an incipient reform movement he himself had been part of. When the chips were down his loyalty was to the machine; but when he runs for office it is as a political progressive.

In his heart, he is an economic radical distressed that the Constitution presents obstacles to socialist theft; but when he runs for office he inhabits the persona of an economic centrist. The balancing act is superb. His chief economic adviser this presidential run is Austan Goolsbee, an economic centrist, while Paul Volcker a much admired conservative has joined his campaign. Both men would do a Republican administration proud. But once in power will he follow their advice?

The economy is probably not where your heart is. Consider, then, the global war against Islamic fanatics, which is far from over. These are not people who want to “teach the argument” in public schools, like Sarah Palin. Their remedy for disagreement is not discussion but decapitation. Where is Obama on the war between barbarism and civilization? He was for keeping Saddam Hussein in power, when the entire Clinton national security team was against it. He was for capitulation on the battlefield once the war started, which would have left the Iraqis to the tender mercies of al-Zarqawi and crew.

In foreign policy, generally, his deceptions are world class. In practice he has spent his political life in league with anti-American, “anti-war” radicals who make no secrets among their friends as to the nature of their agendas. As a sitting U.S. Senator, he was a white flag appeaser. But as a candidate poseur he is able to pull off the credible impression that he is a foreign policy realist.

And maybe he is. Or maybe he’s not any of these things, because all that anyone knows for certain about Barack Obama – the only thing anyone knows for certain – is that he is not what he seems. What we do know, because we have the performances on tape is that he is the most seamless liar since Bill himself – smoother by far. Who is the real Barack Obama? Who can tell? We don’t really know anything about this man’s intentions, and what we do know about his deeds is bad.

We know that he is a man without loyalty. Wright, Ayers, Grandma – throw them under the bus (although perhaps only temporarily, while expedience requires it). When his benefactor Alice Palmer changed her mind about passing him her senate seat, he refused to give it back. When she and two other black candidates attempted to challenge him in the primaries, he went to court to prevent them from running at all. He preferred to disenfranchise their supporters than win in an election.

When TV anchors posed uncomfortable questions to him and his running mate, he had his campaign threaten their stations with reprisals. Michael Barone has written eloquently about the emerging “Obama thugocracy.” What counter-evidence could you possibly produce against this concern? You have embraced a Machiavellian liar and world class charmer, remarkably disciplined as a political actor, breathtakingly able to put on many faces. Should he become president, will you or anyone else be able to call him to account?

More here. KGS
NOTE: At Front Page Mag there is a video of someone who I believe is more than willing to take up the challenge of holding Barack Hussein Obama accountable.